When the atomic bomb was dropped on Hiroshima, Japan, Sadako Sasaki was only 2 years old. She knew little of world politics or wars. All she knew is that her young life was destroyed. She developed leukemia as she grew up. 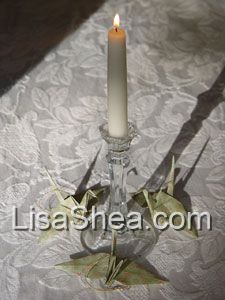 Sadako latched on to the legend of the crane, and the tradition that if she folded 1,000 cranes she would be granted her dearest wish. Her wish was for world peace. As she lay in her hospital bed she folded crane after crane, hoping her wish would come true. Unfortunately, the leukemia was too much for her young body and at age 12 she died. Her classmates folded the remaining cranes, and she was buried with her full 1,000 cranes.

If you are wishing goodbye to a loved one, or hoping for a happy ending to a project, those thousand cranes might be a way to commemerate the attempt.