History of Origami and the Crane

Origami was invented in China around 100AD. The word origami simply means "paper folding". Japan was in the habit of adopting interesting parts of the Chinese culture, and took on the craft of origami around 600AD. It is Japanese origami which has become a world famous cultural emblem. 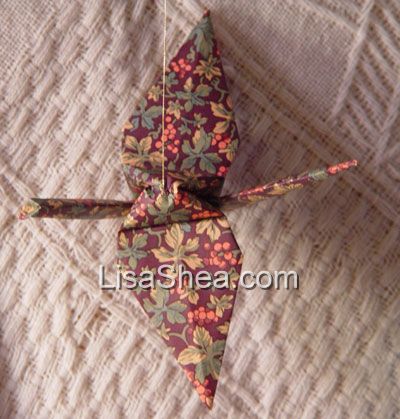 As in many societies, paper was a luxury item, created by hand and used only for important, long lasting purposes. When origami was first brought to Japan, only the rich practiced the art of folding paper into shapes. The shape creation was a way of adding special meaning to what the paper held on it or in it.

For love notes, origami was doubly special. First, the origami shape itself could represent a message. The selection of color and shape help conveyed the true emotions of the writer. Second, origami is an intricate art. If the love note was intercepted, it would be unlikely that the reader could perfectly refold the shape. So the origami love note was very secure - it could not be read by the wrong person without the recipient knowing it.

From its inception, origami has held an honored place in ceremonies that were of great importance. Origami was used at births, weddings, and funerals to help commemorate the occasion in a unique, hand-crafted manner. The origami figures would be treasured by participants for years afterwards.