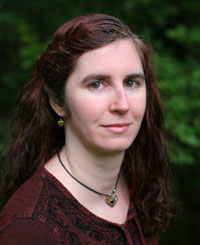 Lisa grew up adoring stories like Dune and Lord of the Rings - stories where the old, safe world we once knew has dissolved into a whirlwind of danger and struggle. Over the years, she has found the power in these tales. Our world is always in motion. Anything a person clings to can be taken away and lost. Life strips us down to the bare essentials, to what really matters.

Lisa's own heritage includes the Lumbee tribe of South Carolina and Tennessee. The Lumbee are considered by many to be related to the Cherokee. Half of all proceeds from Wyoming Vision benefit local battered women's shelters.

Wyoming Vision
A Wyoming blizzard. A crashed car. Haloke's only six years old, but there's no one else. Her father's dead. Her mother's clinging to life. She draws deep within her, to her Arapaho and Navajo roots, and sets out to find help.

Eight long years in the Middle East have honed her skills in defending those she cares for. Now the four men who brutally hurt her younger sister Johona are going to be taught a sharp-edged lesson in the power of karma.

Haloke's Vision
Haloke was finally home. Home to her beloved Wyoming. Home with her younger sister, Johona, who had already endured so much.

And it was Christmas.

Johona's Vision
Christmas was here. A season of peace and love. And, against all odds, Johona was feeling a sense of hope. Not that things could go back to how they'd been before - that could never happen. But that things could move forward. Life could go on.

Tibah's Vision
Haloke had lost everything. She had been forced to watch, helpless, as her innocent younger sister was attacked. She had failed to avoid the mine set to entrap her. And because of her injuries, she had lost her one opportunity to inflict revenge on the four men who so clearly deserved it.

And now her world was collapsing down around her shoulders ...

Navajo Vision
Christmas was the season of kindness. Of Peace. Haloke and Johona should have been relaxing at home, enjoying their newfound life together.

Instead, their world was about to shatter apart.

Arapaho Vision
Haloke's world was spiraling into a nightmare.

She knew just one thing.

She had to do everything in her power to keep Johona safe.

Spirit Vision
Haloke, Johona, and Logan are locked together in a struggle for all they hold dear. And the odds rise higher with each passing minute ...

Haloke is not sure she will ever see the light again.

Dawn Vision
It is the final, desperate race. Haloke no longer fears her own death.

She will sacrifice everything in order to save Johona.

That is all that matters now.

Arapaho Vision Quest Box Set
For those who prefer their reading material all in one place, the box set contains the novellas 1-10 in a single package.

Become a fan of Lisa's writings to hear the latest news on release dates and other fun information!