Wedding Tradition of 1,000 Origami Cranes
Folding a crane takes time, patience, and understanding. These same qualities are vital for a marriage to last and thrive. This is why the symbology of 1,000 hand-folded cranes decorating a wedding is so powerful. 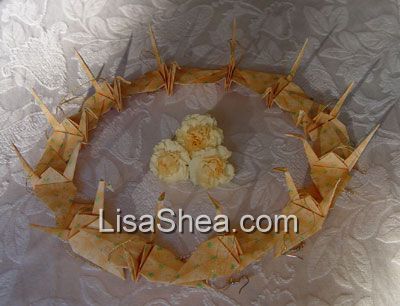 The ancient practice of a happy couple folding 1,000 cranes for their wedding is called sembazuru. The tradition itself is called Tsuru wa sennen. The time and energy put into the thousand hand-folded origami cranes symbolized the patience and trust necessary to sustain a happy marriage. A couple who could weather the long, time intensive folding process together, supporting each other, talking with each other for weeks while taking on a challenging task was proving their ability to maintain a long term, content relationship.

Not only was the folding of the cranes a "proof positive" of the couple's compatibility, but the end result became a visible testament to their love and dependability. The wedding and reception areas would resound with the cranes and their symbolism. The cranes would be strung on garlands to hang along aisles or around doorways. The origami cranes would be used as place markers and as table favors. Crane circles formed centerpieces around flower arrangements or candles. Hanging cranes floated in windows.

Decorating Ideas
Because you have a thousand cranes to work with, you can reach levels of artistic beauty found in few other decorating circles. You can group the cranes to form symbols important to the couple. Perhaps a moon, symbolizing the night you first met. An open circle represents the never-ending joys of life. A fish or cross can represent a Christian faith. The heart is a traditional symbol of love and loyalty. 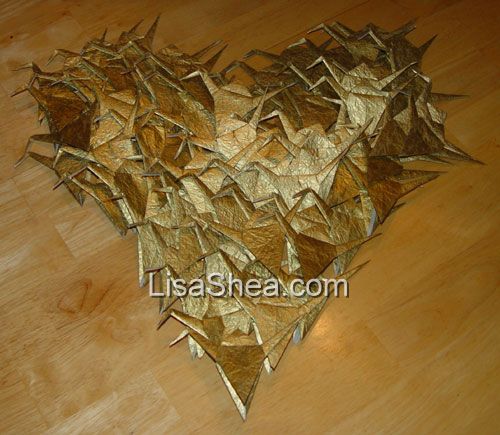 The origami heart image shown here is of only maybe 70 or 80 cranes, and it is quite sizeable - about half of a kitchen table. Although some ambitious couples have given it serious thought, in the end there is no way to make a single giant image with 1,000 cranes unless you perhaps sat there sticking them along the entire wall of the reception hall. Something this large would have to be created "on site". To try to ship a gigantic artwork of 1,000 origami cranes in "finished form" would exceed the capabilities of most mail carriers. As it is, the shipment of 1,000 cranes even in folded, packed form is fairly substantial. It takes a number of boxes.

The way most couples handle the idea of specialized artwork is to do it as a fun project with their family members and friends. I would create and ship the 1,000 cranes to the couple. The couple sets aside an evening with their chosen group, along with rolls of tape and large poster boards or foam boards. The group draws out and tapes on the cranes into the chosen shapes - circles, hearts, fish, stars, and whatever else has been selected. Each creation is unique, is personalized, and is collectible! The finished works of art are displayed during the ceremony and reception, and then can be given away at the end of the wedding, to provide very meaningful mementos to special guests.

Color Themes
Color is critically important in any hand craft. Origami cranes for a wedding were selected for colors which held meaning to the couple. There might be bright pastels for a spring wedding, or rich autumn hues for a wedding held in the autumn. The origami cranes could be perfectly tailored to match the theme.

The cranes become the central image in your wedding decorating theme! Here is the wedding the Today Show did for their 2008 celebration, featuring my cranes! You can see how the red cranes, strung on silver strings with silver rosebud beads, were worked into all of the set components. They form the struts of the bridge, and the vertical dividers behind the couple's heads. 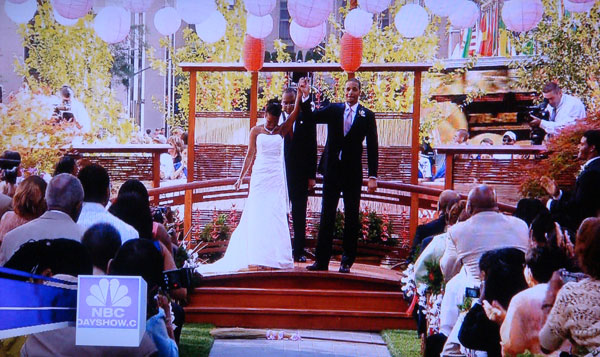 The Process of Sembazuru
I take the tradition of Tsuru wa sennen very seriously. I am an artist with decades of experience with origami and creating a thousand cranes for a wedding is the ultimate form of this art. I will work with you to choose the exact colors to match and highlight your chosen theme. I will discuss ideas for integrating your cranes into your wedding so they seamlessly support the beauty of your ceremony. This can include garlands, shape ideas, name tag suggestions, and much more.

I personally hand fold each crane so that it is a special memento of your once-in-a-lifetime event. You will be proud to pass these cranes out to guests and honored ceremony members, for them to treasure. Artistic creations using the cranes can be used as thank-you gifts for maids of honor and best men. The beauty of the cranes will live on long after the day has passed.

Once we have agreed on a plan of action, the actual process of Tsuru wa sennen takes at least two months. I invest the highest level of quality into each crane, with the knowledge that each one may become the treasured mantel focus for a grandparent or best friend. Please make sure you account for this time in your wedding plans.

The total cost for a thousand crane Tsuru wa sennen project is $2,000 including all labor, packaging, and shipping. That represents a 20% discount from my standard crane-folding fees, as a special gift to the happy couple.

Please let me know if you have any questions at all about including origami in your upcoming celebration!