For centuries Japan was a nation of two religions - Shinto and Buddhism. Shinto was a respect of nature and the environment. Buddhism was a respect for the path of life each person followed. In 1542 this balance was altered, when Portuguese first landed on Japanese shores. The Portuguese brought with them Christianity and guns. The samurai of the time gladly took the guns and accepted the religion that came with it.

Over the years, Christianity was either loved or hated. When the samurai wanted firepower, they tolerated the new religion. When the samurai wanted absolute control over their people, they drove out the priests. By 1597 there were edicts against the Christians and some were even killed. It wasn't until 1873, when the Meiji Restoration began, that Christianity once again was an accepted part of the culture. Still, only 2% of Japanese are currently Christian.

Still, Christianity has had quite an influence on the Japanese culture. White wedding dresses and a Christian style wedding are now normal for Japanese people, and wedding origami is typically a part of this celebration. For the winter holidays, Christmas activities including a Christmas tree full of origami decorations is a fun part of the season. 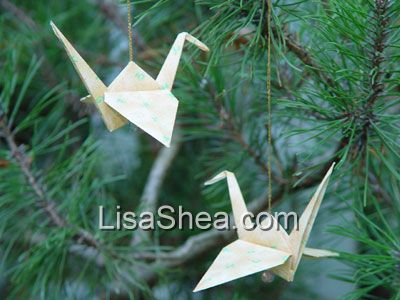 All content copyright © 2021 Minerva WebWorks LLC. All rights reserved.
You MUST GET WRITTEN PERMISSION to reprint or republish any of this material.