Money Origami Currency Fee
Working with money origami is a tricky thing, as far as currency goes. Rather than the "paper" part of the origami creation being a fairly standard crafting item, you are now working with bills which have actual inherent value. You could make a duck which is made from a $1 bill and has a relatively lower value - or you could make a money origami lotus flower from twelve $100 bills and end up with an object which has a core worth of $1,200. As you might imagine, dealing with the currency itself becomes quite important at that point. 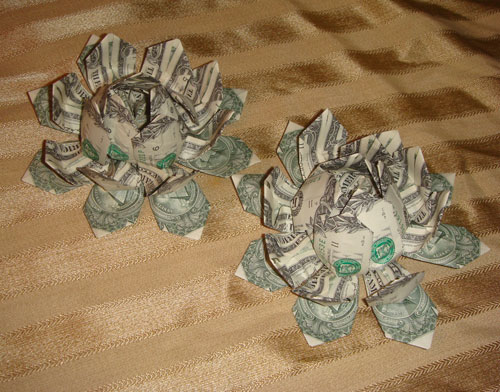 First, any shipments of money origami over $50 will definitely be insured for the cost of the currency. This needs to be included as part of the shipping cost. That way if the post office loses the box - not that it ever has yet with us, but you never know - that money is not lost as well.

Next, there is the question of how the currency is acquired. Say you want me to make you a money origami rose with five $100 bills. That is a $500 rose just counting the currency. For me to acquire that $500, there is a 3% fee on all currency purchases. This cover all the handling fees involved in moving money from your PayPal account / credit card account / bank account into mine.

A separate problem emerges when we come to Euros or Pounds. These currencies are not easily available in the US. I need to go to a bank about an hour away and see what bills they have available. They then charge me an exchange rate fee and bank fee before they turn over the money. So in those cases we need to research the exchange rate fee and determine what the actual cost is of getting the bills to create the shapes with. This will depend on the current exchange rate plus the 3% handling fee.

I will definitely work with you to get whatever type of bills you want me to use in as fair a manner as possible! Just be aware that these issues do exist.