In Japan, the dress for both men and women was the Kimono. While the Kimono is beautiful, it is made without any pockets. To carry items, Japanese would either tuck them inside their sleeves or hang pouches from their Obi, or belt. Instead of tying the string around the Obi, making it difficult to use the pouch, there was a toggle at the top of the string to keep the string from just falling through. This toggle was the netsuke. 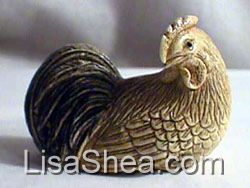 Netsuke were most often made out of wood or ivory. Peasants would have very simple netsuke, but samurai and nobles would have intricately carved items with inlaid gems and gorgeous wood.

Common subjects for netsuke include animals - especially the animals of the Japanese zodiac - and people.

Netsuke faded away in the late 1800s, when most Japanese moved to Western dress styles and now had real pockets. 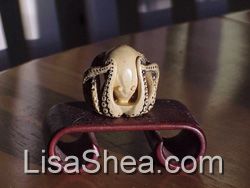