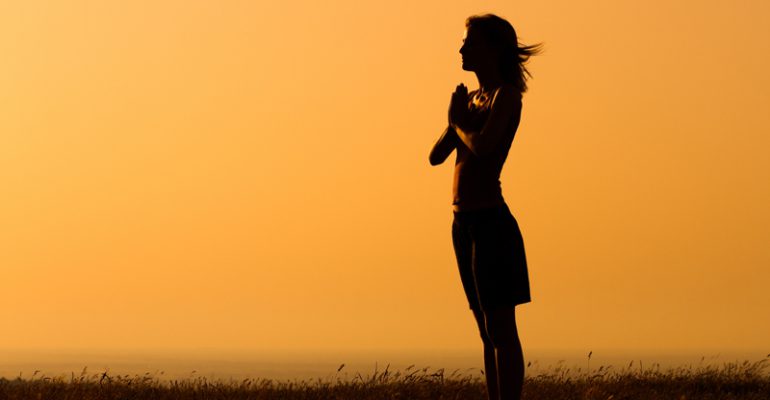 So grateful! I just wrote three articles for wellness blogs on the importance of a healthy mindset and the power of mindfulness.

Every day we can make a choice to make our world a better place.

I have another 5 articles lined up to write today and then I’m caught up! I love doing this :).

Have you practiced mindfulness today? 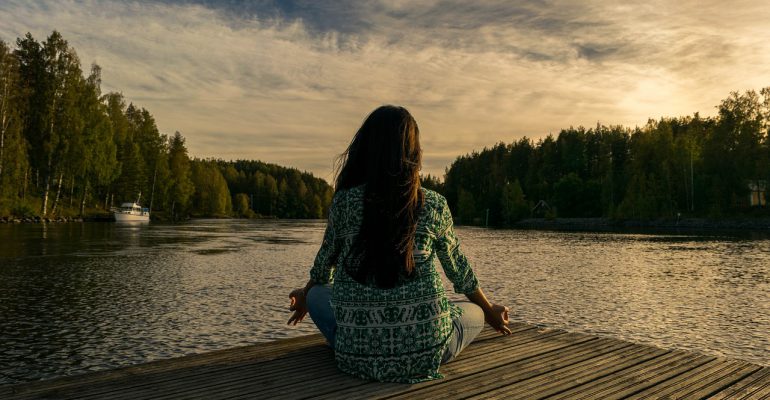 I just wrote a 1,200-word article on an Introduction to Meditation for a new magazine. I love doing these projects on Fiverr. They bring me such joy that I’m helping more people learn how to find peace and stress relief.

One person at a time, I’m doing my best to help to counter some of our modern world’s chaos.

Evening meditation time. Change is all around us. Plants in the UK which haven’t bloomed for 60 million years are about to bloom again, because the weather has gotten so warm.

You know what else wasn’t around 60 million years ago? Us humans. Homo Sapiens only date back to 200,000 BC. The blink of an eye.

Guess our time is coming to an end. It was a nice ride. Treasure every day. 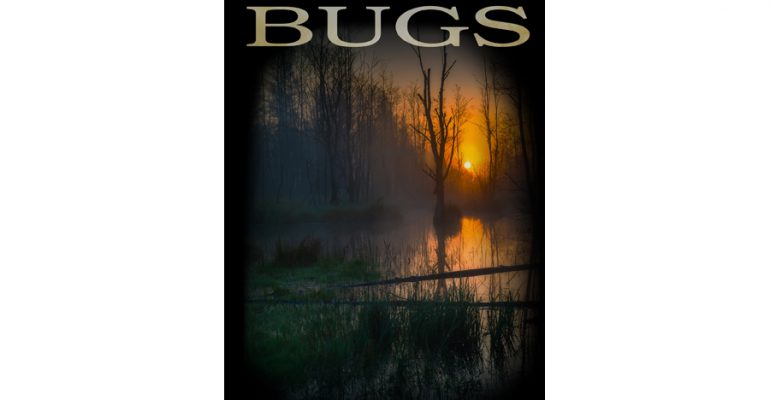 Evening meditation time. Change is all around us. We can each do our part to guide the energy toward supportive change.

Today I helped a friend Tom publish his latest book of short stories and poetry. He’s wanted to publish these for many years. I’m so happy to be a part of his dream’s achievement. It should be live tomorrow! Congrats, Tom!

Join me in a brief meditation – it does wonders for the body, mind, and soul.

Change is all around us – and some change is incredibly damaging which we are causing with our inattentive actions. We need to rethink our lifestyles and become a positive change in the world, rather than a destructive one. 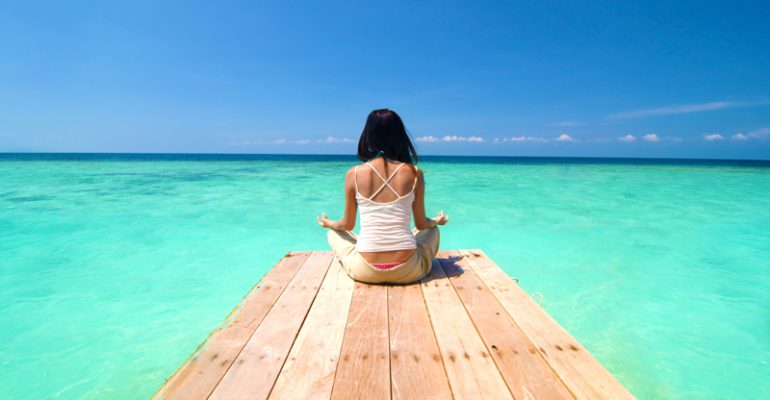 Happy. I just finished writing a blog post for someone on Fiverr explaining the heath benefits of meditation and how to get started. I love writing these articles. It makes me happy to spread the word about meditation as far as I can. 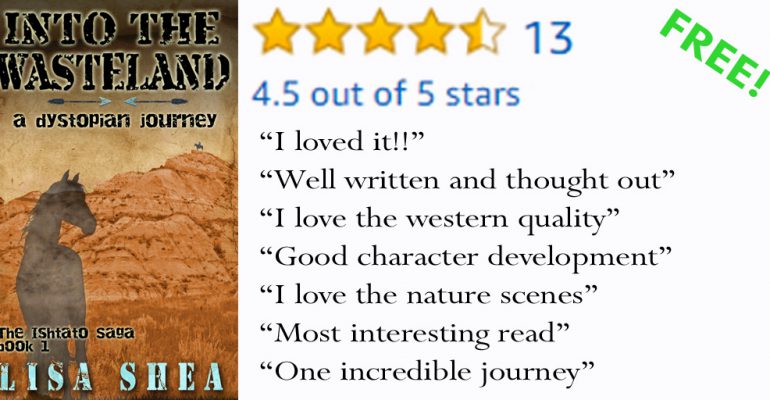 All too soon our world could really be like this, unless we take serious action now. In the meantime, best we practice our hunting and fishing skills.

Book 1 is free – I’d love to hear your thoughts on this. 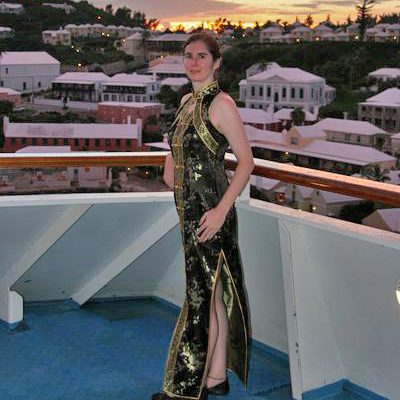 We all sometimes have racist thoughts.

Some people in recent threads argue vehemently that their viewpoint is not at all racist, even when fairly objectively the rest of the viewers can see that it is. I think it’s important for us to accept that none of us are perfect. We are all products of our flawed culture, our imperfect parents, and heck the way genetics work. I think it’s better to say “I might have challenges to work on” vs saying “I am an absolutely perfect human being and my life view is 100% accurate.”

In the interest of fostering helpful communication, I’ll reveal a few issues of my own I’ve found, on self-examination.

First, I love dressing in outfits from around the world. I always have. In high school I went to school in a Mexican dress I bought in Mexico and was ridiculed. “Look, it’s the Chiquita Banana.” I own a number of dresses like this traditional Chinese one. I adore wearing them. My own ethnic heritage is half Ukrainian and then a hodge-podge of German, English, Native American, African American, Irish, you name it. I grew up dancing Ukrainian dances and I own several Ukrainian outfits. But that’s just a part of what I enjoy. I enjoy it all. I love celebrating all cultures around the world. I love us being one enormous amazing world.

In May 2018, a white teen wore a similar dress to a prom and many people were furious. They said she didn’t have the right to wear it. It made me really think about the issue. I am not wearing this dress to “pretend to be Chinese” – it is that I adore their culture as I adore many cultures and respect their skill. It’s the same reason I wear a Chinese necklace sometimes. But I can also appreciate that it bothers some Chinese who feel their culture is being “stolen” by those “in power”. I do my best to hear that message. Here’s the link.

Do you ever sit down and consider how your views of others might be a healthy or unhealthy thing? 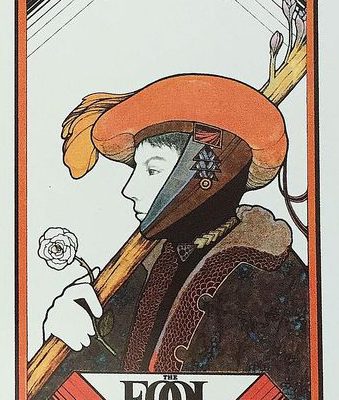 Here is the tarot card of the day! Don’t let the name fool you –

Traditional meaning:
The fool is the very first card in the entire deck. Card #0. The premier spot.

It’s about starting fresh. Without misconceptions. Without piles of baggage and negative thoughts.

Shake off that past. Smile. Look toward that future.

My Interpretation:
People can have an almost visceral resistance to the word “fool” so it’s important to look again with open eyes. This person is dressed well. They are looking ahead with clear eyes. They are nicely dressed – a warm coat, a nice hat. They carry a rod for protection and a white flower for beauty as well.

If they are a bit foolish, maybe it is because they refuse to believe the nay-sayers. They refuse to just give up. They are starting afresh, with fresh energy, and they will do what it takes to reach their dreams. 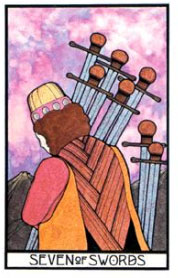 I just drew the Seven of Swords for a friend. It might resonate with some here.

Traditional meaning:
We are stressed out, overwhelmed, and we feel like a victim. Things are just not going right and it’s frustrating. However, this card cautions that as much as we might think it, we are not helpless victims in this. In part it is our own point of view and reactions which is causing this fix we are in.

Yes, life is not smooth. That’s the way life is. We must look with open eyes at the problems and find a way around them. Rather than bowing our head and feeling like a helpless victim, we must acknowledge our part in all of it, get a clear look at the issues, and then take action to make things better.

His head is bowed, and this is quite a lot of metal for him to be lugging on his own. Even the back of his cloak seems harsh, like woven boards.

The sky is gloomy and cloudy, and there are ominous mountains ahead. Somehow he has gotten himself into this predicament. He doesn’t even seem like he was a soldier involved in the fighting – he’s dressed cleanly and nicely with an elegant hat. And yet somehow he’s here in the middle of it now. He needs to look up, see the mountains, and decide what he’s going to do.