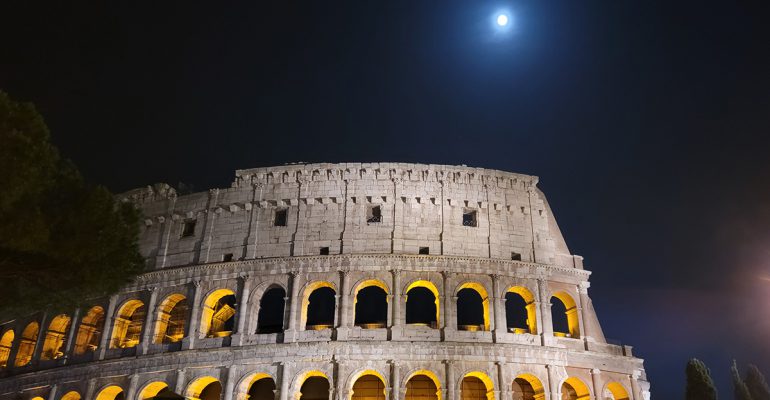 Disembarkation day after a long cruise can be a mix of emotions. It’s a sad farewell to the ship and its floating lifestyle. It’s an eagerness to explore the port city for a few days before heading back home. But on Friday, April 15th, 2022, we had a much more mixed set of emotions.

When we awoke, the ship was approaching Civitavecchia, Italy. I was now sleeping in my mom’s cabin, which was fortunately right next door to my sister. My sister Jenn was now alone, having tested positive for COVID. She was going to be taken to the Golden Tulip hotel in Rome to start a who-knew-how-long period of quarantine. Then she’d be flown home. In the meantime, my mom and I would go to our rental apartment in Rome to enjoy Easter Weekend by the Colosseum. We were flying home Tuesday.

Normally I would have put my luggage out the night before so I didn’t have to deal with a big, heavy bag and the packed-to-the-gills elevators as people tried to leave the ship. However, this ship was less than half full. Also, quite a lot of people were staying on for another leg. I figured the elevators would be less stuffed than usual. Keeping my bag with me would make logistics much easier. My mom decided the same.

So just before 8am we both left her cabin for the last time. Oceania had asked for an 8am clearout, even though the ship wouldn’t be docked by then. We went up for breakfast in the grand dining room. The traditional announcements started sounding, along the lines of “Please, people, we are NOT cleared for disembarkation yet. Please stop standing around the exit area!!” :).

I had thought that Oceania might try to get all the COVID people off the boat first. Jenn was prepared. She was packed and ready to go early. Staying in her room, of course. But nope, she just sat and sat while they started to finally let people disembark.

Mom and I didn’t rush, but eventually we went to the elevators, and there was room for us on them, which is a rarity usually. Then we walked off the ship for the last time. We walked down into the terminal and right out the main doors.

My mom had been expecting a long complicated line with customs and such – but this is the European Union. We began in Spain. We ended in Italy. We never left the EU. There were no customs and no passport checks to worry about. No COVID tests here. No forms to fill out.

So now we were standing outside the terminal – with no benches – and our taxi wasn’t going to arrive for another 2 hours.

Fortunately the terminal people let us sit in chairs just inside, for a while. I kept texting Jenn. Nobody was telling her anything about the status of her transportation. The room cleaning guy kept trying to come in and she kept telling him she wasn’t able to leave yet. She tried calling down to the front desk. They said for her to just hold tight. The ship started doing fire door tests and other activities. She sort of felt forgotten. The only saving grace was we knew there were other COVID patients on board and the chance of Oceania forgetting about ALL of them was slim.

Down at the terminal, it seemed that a new group of crew members were being brought on board. Then the terminal area was wholly empty. Mom and I were asked to leave our seats as they locked up the building. So now we had to stand (no benches) out in front of the building in the pretty much empty parking lot.

Finally our taxi guy showed up. We explained about Jenn not coming with us. He seemed a bit panicked about the COVID news but we reassured him that we were both tested negative. I can’t imagine what his reaction might have been if we’d tried to bring COVID-positive Jenn with us in his car for an hour drive to Rome. Probably a “sorry, find someone else.”

So we waved goodbye at Jenn’s room, I told her I’d keep texting her, and the taxi headed out.

Luckily, only shortly after that, Jenn’s transportation arrived. Oceania brought all the COVID patients along with the spouses down to the parking lot. There was even an Oceania crew member following behind Jenn with an “air blower” to disperse her COVID germs (?? would that make things worse??)

In the parking lot, there were two vans. First the Oceania team put spouses together into a van. Then, when they realized that there were both COVID and non-COVID people involved in this trip, they rearranged things and put the COVID infected into one vehicle and the non-COVID people into another.

This is where Jenn realized that many of the other people had no idea where they were being taken, what the plans were, or anything. So the patients all shared text numbers and started sharing whatever information they knew. The vans set into motion.

Now finally I could see her dot on the map ‘following me’ and that was reassuring. We were all going to Rome. We would be not too far apart from each other. We could figure things out when we got there.

The spring landscapes were lovely. Our driver was nicely chatty. The ride passed smoothly.

Our apartment rental was a few blocks away from the Roman Colosseum. There was a bit of confusion – our contact had forgot her phone in the car so when we kept trying to call her she didn’t answer. When we got to the apartment, it just happened that another resident let us in to the lobby. Mom figured out which apartment it was and knocked on the door. It turns out our contact was inside, cleaning the room, and apologized for not having her phone on her.

We were able to put our bags in there and then headed out to find lunch.

Mom found a place with a cheap pizza lunch special, so we sat at the outside patio. Each of us was given a huge (to me) pizza which wasn’t pre-sliced, so it was an adventure eating it. As you might have figured out by now, I tend to have a small salad for lunch usually, so this was a bit of a departure. I think I managed to eat about half of it.

Jenn was now safely at her hotel. Again, she was not too far away from us, which was good. The patients weren’t told much but they were now acting as a team. One patient managed to get a photo of the wifi password. Another patient managed to get a photo of the QR code for the hotel menu. They were told they could order off the normal menu with a limit of $100/day for food. Each patient (or couple) was brought to a small room. Not a luxury cabin, but certainly far better than many reports of quarantine hotels that I’d read about.

So they were all settling in, which was good.

Mom and I went back to the apartment and got settled. Soon it was time for our evening dinner plans.

We decided to take a taxi there rather than walk.

The taxi stand was right next to the Colosseum, just a few blocks away. The police were blocking off the entire Colosseum.

It turns out the Pope was going to walk this route in just a few hours. So here we were, staying by the Colosseum, and just as we were leaving, the Pope would be arriving.

Our taxi had to go the ‘long way around’ because of all the police barricades, but finally we arrived at the Piazza Navona. It is truly a beautiful area. This is the Fontana dei Quattro Fiumi crafted in the 1600s.

Our event was being held on the third floor of the building. Unfortunately, the elevator was out of service. So we had to walk up a long spiral staircase for three floors to get to the area. We were a bit early, so we were asked to sit in an elegant room with the fountain view. Then, as the time grew closer, we were brought to a patio for Champagne.

There were only four couples for this dinner. We were next brought into a room with a pianist.

Here’s the selection of songs. Some were solo-singer and others were duets.

The food was delicious, and after each course we would hear a few beautiful songs right there in the room.

Finally the evening was at an end. It was probably 11:30pm. We decided to walk back to the apartment, about a half hour. Rome was gorgeously lit at night. The entire walk was lined by stunning architecture.

In due course we were back at our apartment. We knew Jenn was safely in her hotel. We knew she was being cared for. Tomorrow would be a fresh day to figure things out.

It was time to sleep.

I’m not sure you can see them, but there were two separate buildings on this one street both flying the Ukrainian flag. We saw quite a number of Ukrainian flags throughout our trip. It was heart-warming that so many people were supporting Ukraine. It’s also worth mentioning that we’d been warned before the trip that it might be impossible to find an open restaurant in Rome over Easter weekend. We prepared ourselves for having to just buy food and cook it in the apartment. We found quite the opposite – there were a TON of restaurants open and eager for customers.