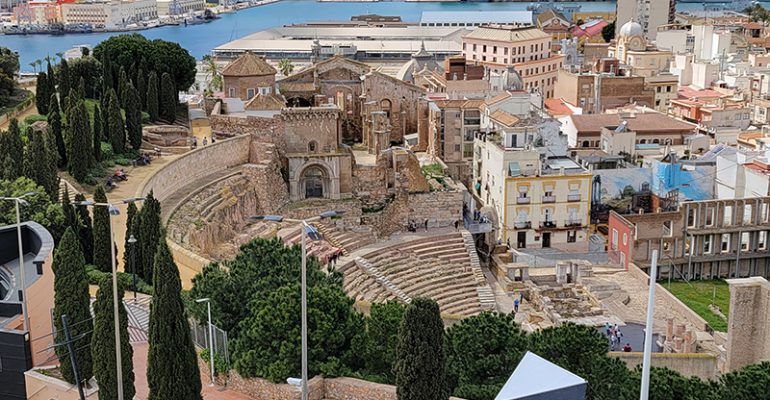 If you’ve ever been on a cruise, you know the way time strangely works. When you start the cruise, it seems like you have a vast number of days to explore the world. Then, in the blink of an eye, you’re already on your last port of call. How did it happen?? Where did the days go?

On the Oceania Riviera cruise, Day 10, on Wednesday, April 13th 2022, was our last official full port day. Then we had one more day at sea before we landed bright and early on Friday morning in Rome, Italy.

Our plan for Cartagena, Spain was to take a trolley to see all the major sights. By the end of a cruise often we are exhausted and burnt out. It’s good to wind things down a bit by this point. The trolley tour seemed a good idea.

We didn’t land in Cartagena until afternoon, so I got to enjoy a morning art class. We had lots of fun with shading. Then I enjoyed a delicious salad in the buffet. Soon it was time to gather for our trolley. Only Jenn and I went on this one.

The trolley was a road-driven series of connected “carts”. They had full well-worn glass windows, so they weren’t great to see out of, and each bench seat was about four people wide. Jenn and I went to the very back where we had the best chance of a window seat. We lucked out. She got the very back seat with a window and I got the seat right in front of her.

I suppose it was good that there weren’t any “must see photos” on this driving tour. The streets and alleys were very similar to other Spanish towns. They were pretty, but I vastly prefer walking the streets myself so I can pause and arrange an angle. With the drive, and the less-than-clean windows, one sort of had to just point, shoot, and hope for the best.

This view shows you the trolley itself as it comes around a corner.

About half-way through the drive we reached an overlook. We got out there to spent twenty minutes taking photos and videos from the overlook. We really hadn’t gotten that far from the dock.

From here we could see a really pretty Roman ampitheater. Hmmmm. If we had walked the town we could have visited it. A lesson for next time.

On the other hand, there were wild (tame, I suppose) peacocks wandering around the overlook. One of them became very fond of my sister. I got quite cute video which I’ll load shortly.

A couple decided they’d rather walk back than take the tram. That meant my sister was going to have the whole back seat to herself – but instead one of the other passengers sat back there with my sister. The passenger was one of my fellow art class students. So the trolley meandered its way back to the dock.

We had our 4pm classical music with tea. Then dinner in the Grand Dining Room. Today was “Taste of Russia” – with Chicken Kiev which is from Ukraine. They print these menus fresh EVERY DAY. One might think they would have adjusted their wording a bit given we were 10 days into this tour and Ukraine was actively being bombarded.

And, you know, this was one of the prettiest plates on the ship’s travels, and just saying that makes me shake my head a bit. I could showcase all sorts of photos from “lesser quality ships” where the food was much more appealing looking. If Oceania had two years to launch their big plans to win us back with their amazing food, it didn’t quite get there.

So, to summarize Cartagena, Spain – it seemed an amazing city but next time we should explore on foot. The trolley tour just doesn’t do it justice. It’s also fair to say that after the amazing sights we’d experienced up until now, there was nothing we saw here which held up to that “wow” factor.

Peacock Falls in Love with my Sister / 4 Parts –

The next day was: