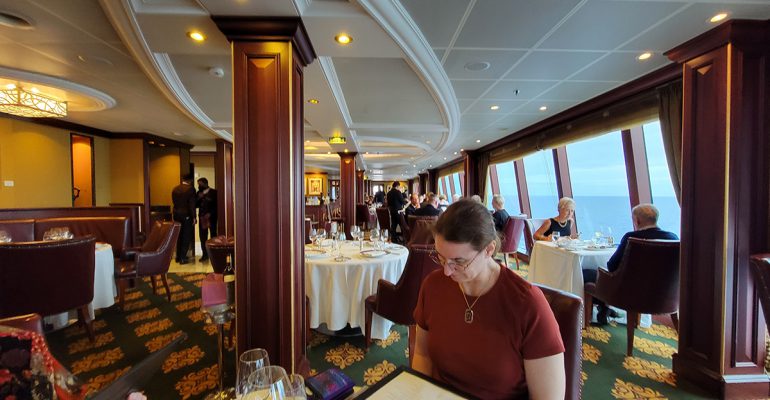 The past two days on the Oceania Riviera, in the Canary Islands, have both involved a LOT of attentive activity – either a lot of walking or a lot of steady-hand videotaping for my sister. Today was an at sea day, cruising back toward Spain, and I was grateful. Even though it was all at sea, though, it still had a busy schedule. Plus, today was Monday, meaning I had my teen writing class from 11pm to 2am (ship time).

Today was two art sessions – one at 9am and one at 5pm – both on working on the human face. I am generally a ‘rank beginner’ with faces so I looked forward to learning techniques to practice. I grabbed some fruit for breakfast, and by 9am bright and early I was in the studio with Noel Suarez. We had, again the usual gang, about 8 of us, all ready to keep building our skills.

Noel really is good. The two hours fly by and often we stay for longer. The way he can start with a simple shape and make it become 3D is stunning. Once we were done, it was time to meet my mom and sister for lunch. I had a tuna melt. Again, I’m just not keen on their plating technique in most cases. It’s missing something.

I caught up on doing edits for my teen writers, and then it was already 4pm tea time. Now, oddly, the musical quartet had become a trio. We were told that one of the violin players had gotten sick and left the ship.

I left the tea experience right at 4pm for my 5pm art class to work on the face. I really wanted to get as much of this as I could – but unfortunately at 6pm was the celebration party for returning Oceania cruisers. So I had to cut out early to go up to that party.

The room was ABSOLUTELY PACKED. Not only that, but we were told they had to break this party up into TWO SHIFTS because there were so many repeat travelers on board. Even though the boat in general was only about 40% full. Apparently, even though there were relatively few people on board, nearly all of them were people who had traveled on Oceania before. The thought was that most people were still afraid of cruising. Only repeat cruisers, who were chomping at the bit to get on board, were willing to cruise. So it made sense that nearly all of the people on board were repeat Oceania cruisers.

What this meant was that the room was jammed full and, because everyone was eating and drinking, nobody was wearing a mask (well nearly nobody – the staff were). The captain and main crew weren’t there – just the ‘public crew’ types of people. They gave a few call-outs for the people on board who had cruised the most and that was about it. The house band played some music.

Then it was time for dinner. Tonight we were dining at the Polo Grill.

Again, I’m just not sure who is designing their plating options in these restaurants.

And then – a spark of beauty! I’ve found someone who is paying attention to their task in life! This is what I would expect at a nice restaurant. Beautifully done. This is visually appealing in a number of aspects.

When it got to be teen-time, I brought along my power converter, my fully charged laptop, and I went up near Baristas. It was completely empty and quiet by this time. I prayed to the WiFi gods. They heard me! The 3-hour glass went as smooth as silk, the teens had an awesome time, and life was good. By the time that was over, I was quite ready for sleep.

Here are all the menus from the entire trip, if you’re curious what type of food was offered both on ship and in Rome –

The next day after this was: