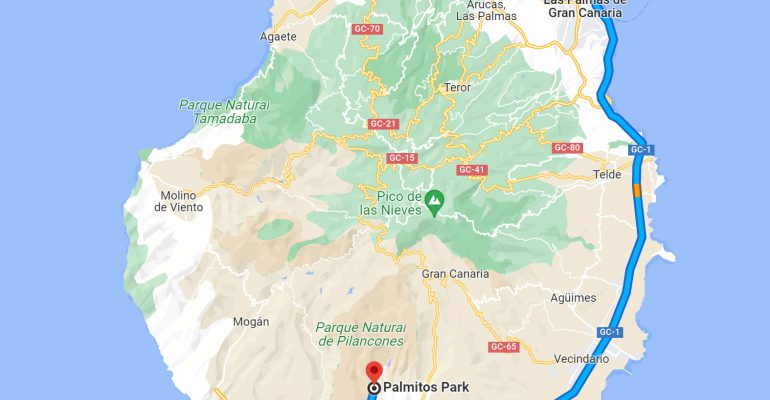 Today was one of our favorite tours, that we’d been looking forward to the entire trip. This involved going halfway around the island to Palmitos Park. Palmitos Park has a wealth of native flowers, animals, and landscapes, plus other attractions as well. The down side was of course the drive, but we would be able to last that!

This trip was for me, Jenn, and my mom.

Off we drove. The first main part was along the coast, which was quite pretty. Then we delved into the heartland of Gran Canaria. This was less lush / more rocky and bare. The map shows how the island tends to be that way.

Up, up, up we went, in twisting narrow little roads, until we got to the location.

The park is quite large, and there are lots of things to see. We would have to pick and choose what we had time for.

The trails can be quite steep, and we wanted to get up to the raptor show (at the top center of the map) in time to see it. We didn’t race – but we also didn’t dawdle much. We went into the various walk-in aviaries, which were really cool. I took a lot of video in there. There were waterfalls and lush gardens along the path. We saw a huge six foot long komodo dragon! And then were were at the top. It overlooked a vast valley.

The show was absolutely amazing. The hawks, falcons, eagles, owls, etc. all flew right over our heads, only inches above us, then soared high into the sky. They raced down the entire length of the valley until they were clear out of sight. I recorded the entire show. One of the birds didn’t come back. I’m sure it must have returned later after its lizardy snack.

Then we walked through the cactus garden and saw a Giant Gran Canaria Lizard in the wild. There were all sorts of other birds in more traditional cages. However, by now we were already running late for the bus. We had to race back through the butterfly enclosure to get to the bus in time. We barely made it!

We hunkered down for the long drive back. I took some video along the way. I was delighted to see a lot of windmills. Gran Canaria does its best to generate its own power and to desalinate its own water.

Finally we were back at the Oceania Riviera. I had a lovely fruit salad for lunch. Soon enough it was time for the 4pm tea time, then 5pm art workshop. For dinner we decided to eat at the regular Grand Dining Room restaurant. It was nearly empty.

Here’s some of the dishes. I still feel they can work a bit on their presentation.

Rather than list all 17 videos this time, I’ll link to the full play list for this Oceania Riviera trip. Scroll down to where the bird videos begin – that starts the block of videos I took today.