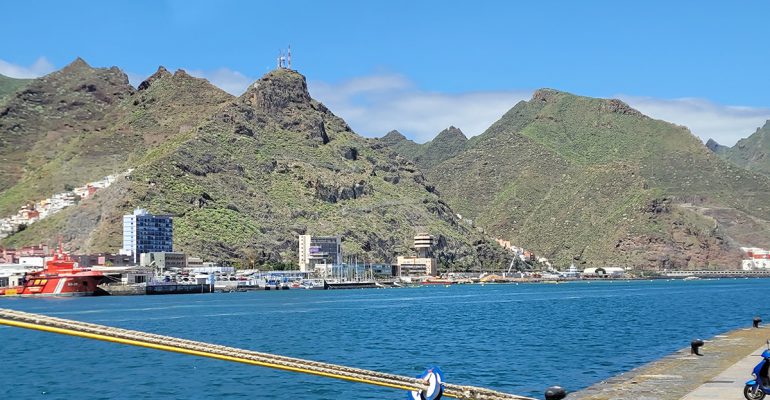 Day 5 of our Oceania Riviera Cruise, on Friday, April 8, 2022, had us landing at Santa Cruz de Tenerife, in the Canary Islands. The Canary Islands are off the western coast of Africa, up by Morocco, but are owned by Spain. This island itself is named Tenerife.

Tenerife is a spiky-mountain green lush location. It’s known for a large volcano at its center, named Mount Teide, which is the highest point in Spain. It’s also the location of the Teide Observatory.

We had booked tours on Canary Islands 2 (Arrecife) and 3 (Las Palmas), so we wanted this first one to involve a relaxing stroll around the port town itself to explore on our own. We decided to eat lunch first so we wouldn’t have any issues with missing lunchtime.

As we disembarked and talked to the local contact, she advised us that most of the locations would be closed for the afternoon siesta from about 2pm to 5pm.

Indeed, as we strolled about town, most places were closed up. This downtown area featured a number of global names. McDonalds was there, and we were amused by a store selling “New England” clothing. The items within weren’t things we’d seen around Massachusetts for several decades.

Apparently in New England we all wear Izod alligator shirts. And Dockers shoes.

We at last headed back to the ship.

At 4pm we had our daily relaxing tea session with the string quartet. Here’s one of their songs.

Here’s the type of items served at tea. As I’ve mentioned before for me they are fine to nibble on to pass the time, but it’s not what I would call “food” that I would want to eat for a full lunch. We are all different in how we approach food.

Today there was no art class for me.

Since, we had some time before dinner, Jenn and I did a set of laundry. Laundry is wholly free to do yourself, and the machines were always open any time we checked. The detergent is free, too. So we spent some time quietly watching the machines whirrrr.

Then it was time for dinner. We were feeling casual and not up for a specialty restaurant, so we ate in the regular restaurant. It was very quiet.

The food was ‘good’ for all that entails. I look at this and say “yes that’s nice” but I’m not sure I really say “that is quite special”. When I look at this, with the lace doily and the thin greens and the hanging shrimp, I sort of get that sense of a faded country club. It definitely could just be me of course.

Similarly, one night we ordered the petit fours. I was expecting beautiful little squares of cakes and such, exquisitely decorated. Instead we got six or so little cookies and pastry objects that were all dry, mostly boring looking, and fairly tasteless. So I had to ‘downgrade’ my expectations of the ship food and just become OK with them.

I’d expect to see this at a chain restaurant, but not at a high-end steakhouse.

To summarize again, it’s not that the food in general was in any way ‘bad’. It just wasn’t “special”.

Tomorrow was the big volcano tour, and I love volcanoes, so we went to sleep early!