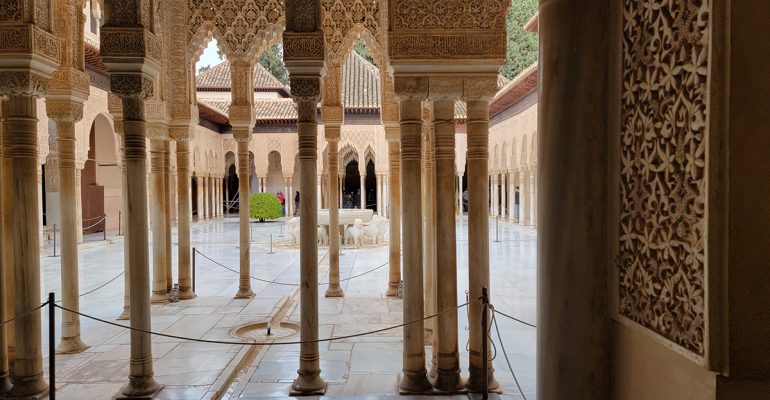 The third day of our 2022 Oceania Riviera cruise had us docking at Malaga. We loved this not because of Malaga itself but because that was only an hour and a half from Alhambra – a gorgeous historic Moorish palace. So we reserved an Oceania bus ride to and from Alhambra, and then separately bought a timed tour entry into Alhambra itself. Oceania didn’t offer the Alhambra entry.

The bus tour left at 8:15am with a return time of 3:45pm. Even with the hour-and-a-half travel time, that would seem to give us plenty of time at Alhambra. My mom set us up with an entry time of 10am to give us the most time in the palace itself.

There were only 8 of us on the bus – three groups. Off we went. The tour guide gave us all sorts of information about Malaga, Andalucia, and more as we drove along. Mom asked several times to get information on Alhambra, so we’d be ready when we arrived, but he waved her off, saying we’d talk about that later. Part-way up we stopped at a rest stop which seemed to sell quite a lot of knives. Again, Mom asked the guide about Alhambra and he waved her off.

We finally arrived in the town near Alhambra and he got us off the bus. He started walking us at a slow pace toward the town center. Finally we stopped him and asked, why are you taking us on this slow walk? We need to get a taxi to get up to Alhambra so we can get our tour there! And he said: Wait, you’re going to SEE Alhambra? All of us in the group said YES that is the whole reason we just rode an hour-and-a-half. He was completely befuddled. He thought we just wanted to roam around the town at the base of Alhambra. Despite all the times we tried to talk with him about it. So he hurried to find us taxis and get us in them.

Our taxi driver asked if we had tickets, and we said yes. So he drove us right to the main entry area. When we showed our tickets there, we were told these weren’t actual tickets, they were vouchers. We had to go to our tour agency to have them ‘converted’ into tickets.

This is where we could have given up. It was about 11am now, so long past our 10am tour. But let me digress a moment.

We tracked down the phone number of the tour group and gave them a call. They gave us their address and said to take a taxi over. So over we went. At first they said we had missed our 10am tour, but then they found spot on the upcoming 12 noon tour and stuffed us into it. Hurrah!

The tour guide was great, and the grounds were absolutely beautiful. In the palace, the tradition at the time was not to have any figurative images, but just beautiful calligraphy of words. There was latticework, stonework, fountains, gardens, and more.

We carefully watched the clock and as it got close to our bus departure time we had to leave the tour. We grabbed a taxi back to the town center, got on the bus, and soon we were heading on back to the ship. There were cool sculptures along the dock area.

We had the 4pm tea time with the classical music group, then at 5pm was my second calla lily art class. We worked more on shading and techniques. Then soon it was dinner time. We had reservations for Red Ginger, the ship’s Asian restaurant.

I adore all Asian food. I love, love, love it and eat it quite a lot. So I admit I had sort of high expectations for Red Ginger, with Oceania touting itself as having the best food on the high seas and with Red Ginger being a specialty restaurant.

Yes, it was nifty that they had a ‘choose your chopsticks’ selection and a hand towel that ‘expanded’ like a snake when they poured warm water on it.

But the food itself just wasn’t “special”. It was OK. The sushi tasted bland. The tuna tataki (a favorite of mine) was dry. My sister specifically chose a dish for its ingredients – and then the actual dish had other ingredients that she didn’t like in it. When she asked the waiter about it, he said in essence “they’re all vegetables”.

On the up side, they have DELICIOUS herbal teas here so I asked for a few to take with me so I could have them at the afternoon tea times.

Tonight the ship passed the Rock of Gibraltar. We very nearly missed seeing it. The captain had said we’d pass it at 9:30 so at 9:15 we got our gear and went out to set up – and we were already passing the rock. So we grabbed some quick photos.

All in all, I’m glad we persevered and were able to see some of Alhambra. I do wish the tour guide had listened to us beforehand so we didn’t waste the extra precious time we had. I’m glad we went to Red Ginger but I definitely didn’t want any more sushi from them after that meal. And it was fun seeing the Rock of Gibraltar.