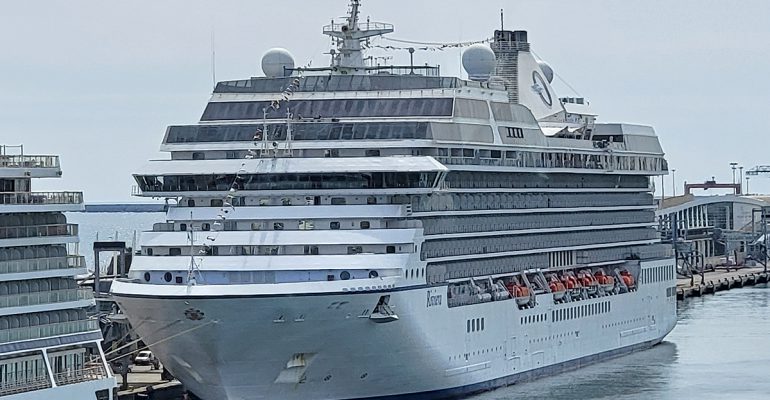 My wonderful mother offered to take me and my sister on an Oceania Riviera cruise, to all spend some relaxing time together. We were gone from April 4 to April 19, 2022. It was delightful! Over the coming days I’ll post a day by day virtual vacation for you, to travel along with us. Let me know if you have any questions!

Day 1 was the flight from Logan in Boston, through Newark, and out to Barcelona. This was an adventure.

With the pandemic, first we had to get pre-flight COVID tests which, thankfully, all came back quickly and negative. As an added twist, Oceania announced just the day before the flight that they now required boosters. Luckily we all had boosters, but anyone who had not gotten them would be unable to sail, as they required the boosters to have been given at least 14 days prior.

On Sunday evening Bob drove me to Boston to get on the plane. The flight was delayed due to bad weather. I got to Newark late, but fortunately still in plenty of time for the connecting flight. I met my sister Jenn there! That was delightful. Soon enough we were boarding the plane.

But maybe not. After we were all boarded, they told us that there was a problem with the engine. They kicked us all back off again. By now we were hungry so we got some snacks. Then the airlines decided maybe they should feed us and gave us a $40 each voucher to buy food. By then, though, most of the restaurants were closed. So we had to scrounge to find things to eat. Now we were worried they’d cancel the flight, and our boat left the harbor the next afternoon. If we cancelled, we’d have to chase after the boat …

At last they got us onto the plane. We headed out! I had cycled my schedule and slept most of the way.

We landed in Barcelona, Spain and were met by Oceania crew at the exit. They wanted to gather ALL the people together onto one bus, so that meant now sitting and waiting … and waiting … for other flights to come in. We did meet a delightful British couple Nick and Mary who we talked with. Finally, all the people had come in and we were all led along to a bus. The bus took us through Barcelona and over to the dockyards.

Here is the ship! The Oceania Riviera!

It turns out that the ship was only at 40% capacity, maybe due to the last-minute booster requirement and also due to the ship going to high-risk locations like Spain and Italy.

We got into the terminal and were given another COVID test. We sat until that was approved. Then we were let onto the ship. We went right up to the top deck to get some food. FOOOOD!!!! Then down to our room. It turns out my sister’s power outlet was confiscated for being too large. On the up side, we didn’t have to do the standard ‘stand on deck with life preserver’ exercise. We just had to watch a video and go to our gathering location to check in. That was it.

We went down to the main dining room for dinner, but they were so empty that they offered us a free chance at a specialty restaurant. So we went to Toscana, their Italian restaurant. It was lovely. I had a caprese salad and porcini mushroom risotto.

The boat headed out into the seas!

You’d think I would sleep by now, but I have an Outschool teen writing workshop I run Monday evenings. In Barcelona time, that was 11pm to 2am. So I brought my laptop up to the quiet coffee area and I had fun talking with the teens. Finally at 2am I was able to go to sleep!!

Ask with any questions :).

Someone asked about the double COVID testing. Yes all three of us got tested in our home areas on Friday, then flew out Sunday and arrived on Monday a few hours before the boat left Barcelona. So we had to get those home tests to start with. Mine was free, supplied by my normal health care provider.

In addition, when we arrived at the dock area Oceania tested us there. It wasn’t charged as far as I can tell. So the sequence at the dock area was we went through security / xray machines, then we went to a testing area. Each person was swabbed and then sat in a waiting area with chairs. It took maybe 15 minutes. Once we were approved, we then went to the ‘registration’ area where we got our key cards. Then we got on the ship.