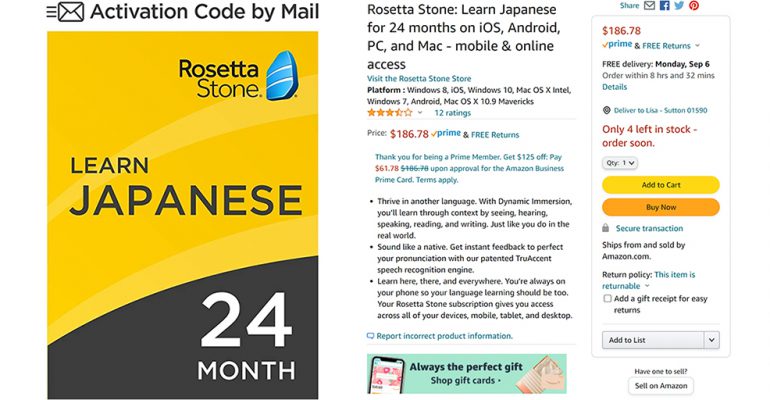 I’m a teacher, and it has been on my list for a while to learn Japanese, for a variety of reasons. When the Pandemic hit, I knew this was my opportunity. Rosetta Stone has a great reputation for language instruction, and so I began my quest.

Fortunately, I’m a member of the Amazon Vine review team, and Amazon offered me a review copy of the software Rosetta Stone: Learn Japanese for 24 months. I was overjoyed at the opportunity to work with this software and put it through its paces. As I said, it’s been a dream of mine to learn Japanese.

No problem, I said, I’ll just buy a copy myself with my own money. I was so in love with the idea of having the Rosetta Stone software that I was quite happy to pay the $70 purchase price to buy a copy. I put in the order in July 2021, and the order began processing. The order then stalled in a “pending verification” status. I wrote Amazon support every week for a month straight, asking when my software would arrive. Each time they apologized for the delay and said I’d have it in 3-4 days.

Over a month passed. Finally by the end of August an Amazon customer service representative advised I simply cancel the previous order and buy myself a fresh copy. The price had now risen to $90 for the software, but they said they’d credit me the extra $20 after the order went through. So I purchased the Rosetta Stone Learn Japanese software for a second time, although if you count the Vine review copy I never received this was now the third time I had attempted to get the software.

That second August order went through and went into a processing state.

There was no way for me to manually cancel the initial July Amazon order through my interface, so ten minutes after my purchase I went into the Amazon help system and asked the Amazon support person to cancel the July order. That way I would just receive the new (second) August order.

The Amazon support person mistakenly cancelled my pending August order, leaving the stuck July order in my account. I immediately saw that problem in my order queue.

I contacted Amazon chat support AGAIN, this was only about five minutes later, and informed them that they’d mistakenly cancelled the wrong order. The Amazon support team member apologized profusely. They said they would now cancel the July order like they were supposed to. They asked me to please re-order the Rosetta Stone software (for a third time) and buy it. They said everything would be fine now.

They did cancel the July order.

I went into the Amazon page for the Rosetta Stone Learn Japanese software. Keep in mind this was maybe 15 minutes tops from when I had just ordered the software for $90. The price for the software was now $250. The price had jumped by $160 in the space of 15 minutes. And due to Amazon cancelling both of my existing orders, I was now completely hosed in terms of maintaining either previous price.

I of course promptly contacted Amazon support again. I was kept on the system with Amazon for a total of four hours over the course of this afternoon. Amazon’s team said too bad, even though it was their fault that both of my previous orders were now cancelled, they had no way of honoring EITHER price that I had previously purchased the software for. They also didn’t find it in the least bit suspicious that I had an order placed for $90, that Amazon mistakenly cancelled the order, and that within MINUTES the price leapt up to $250. They said that because of that price discrepancy, I was out of luck. I should go find other software to buy.

At the end of the four hour chat, including talking with managers, I indicated that I needed to go teach a class. I’m a teacher, which is part of why I need this software. The chat system indicates you have a full 24 hours to resolve issues at your own pace. I left all the chat windows open. When I returned to my computer, the Amazon team had ended the chat on me which also meant that all of our conversation was now gone. I had no way to document any of it.

I’ve been a loyal client of Amazon’s since 1998 and have always lauded their customer service and support. I am absolutely flabbergasted by this situation and how it has dragged on for over a month.

This should have been a simple software transaction. How it could have taken a month to send the software to me, software which said on the Amazon page was in stock and shipping quickly, makes absolutely no sense. And then for Amazon to cancel both orders on me in the space of twenty minutes, and then stick me with a $250 price tag on $70 software, seems fairly questionable. Never mind shutting down our chat.

I went back to the software page on September 1st. The price had dropped again to $90. I put in a fresh order – my 4th attempt to get my hands on the Rosetta Stone software, for those keeping track. It claimed there were 4 copies in stock and I’d get my software by Monday. The software is now stuck in a Pending Verification state.

I used Amazon chat on Sept 2nd to talk to a rep about it. They say it’s out of stock (even though the public screen says it’s in stock) and I’ll get emailed eventually when it comes into stock. They had no thoughts at all about how many orders were pending, when inventory might come in, or when I might get the software. So I’m expecting to go through months of problems once again, with me only getting “it should be available soon” messages from their support team.

Buyer beware for anyone who tries to order the Rosetta Stone Learning Japanese software.