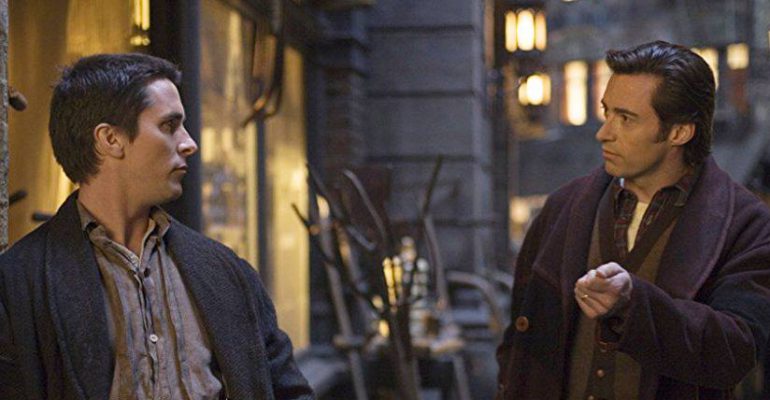 There are many Christopher Nolan fans who count The Prestige as their favorite movie of his ever. The movie follows the conflicts between two competing magicians, played by amazingly talented actors Hugh Jackman and Christian Bale. The actors throughout this movie are fantastic, and there are all of Christopher Nolan’s typical twists and turns.

Why am I just not into this version?

First, I saw this movie late in the cycle. I had already enjoyed many of Nolan’s later movies when I decided to rewatch them all in order from the beginning. That meant I saw The Prestige long after seeing other of his “masterpieces”. It could easily be that if I’d seen this first, I’d have been spellbound by the interweaving of time and character and twist. However, by the time I saw The Prestige, I had fairly high expectations. I already knew the actors would be wonderful. I know the writing would be great. I was looking for that extra something.

My boyfriend and I love magic and watch magician-themed shows fairly often. So the topic should have drawn us in. I also love historical films, so the Victorian setting also was intriguing. However, the entire plot just didn’t hold up to what I was expecting.

First, it was fairly clear right from the beginning that Hugh and Christian would become fierce rivals. It was fairly clear that Hugh’s wife would die tragically due to Christian’s idiocy about tying knots ON HIS FRIEND’S WIFE. And how could she possibly die after only sixty seconds (or slightly more) in the water? CPR was known about in Europe and England since the mid-1700s. These high-water-usage nations dealt with victims of near-drowning fairly non-stop. They would know how to rescue her! And she hadn’t even been in the water for that long. So the entire wife-dying scene was ludicrous.

Then they didn’t inspect the knots? If I was the husband that would be the FIRST thing I did after I stopped sobbing my eyes out. And then I would have killed Christian. Over, the end.

So then we have Christian obsessing about a Chinese magician who is super-strong but pretends to be weak all day long so his act retains its power. And Christian has two personalities where he half-the-time loves his wife and half-the-time doesn’t. It is instantly clear he has a twin brother (who happens to be always near him in poor make-up) to do his planned-for perfect trick.

So I kept waiting for the actual twist-reveal which went beyond this obvious point.

But, no. Christian gives a fake diary to Hugh which Hugh somehow takes eternally long to translate and gets that done at the perfect time – AND the place he goes to miraculously creates a PERFECT CLONING MACHINE (I am not kidding) which can make an exact clone of him any time he wants. Nobody uses this to clone gold or medicine or food or anything useful. Instead, Hugh decides to use this to (again, not kidding) clone himself EVERY NIGHT and kill that clone EVERY NIGHT to do a magic trick. Why not just clone himself once and then have both clones keep doing the trick? Why kill every single clone one after another and build 100 water-boxes to keep drowning the clones in, and KEEP ALL THE DEAD BODIES?

You can say, he needed a freshly-dead body to be able to frame Christian for that death, but surely if you have an exact-cloning machine you can come up with a far more elegant way to frame Christian. And you don’t need all the bloating decaying bodies in a warehouse for all of time. Plus, it is ridiculous that this super-famous magician that is seen by thousands of British citizens would never be recognized as the wealthy lord. There were plenty of wealthy people in that audience.

I was incredibly disappointed in the end. The Christian side simply had the twin brothers, which was fairly obvious from the beginning. Hugh was the wealthy lord, which we knew pretty much from the beginning, too. Hugh’s wife stupidly trusted Christian to tie knots and died in a breath or two. Christian’s wife stupidly lived with his switching personalities and then killed herself in desperation, even though she had a daughter. She should have just left the jerk. And the mistress who loved Hugh and then flippantly switched to love the “Christian alter ego” stomps off. The women all seem incredibly one-dimensional and define themselves just by the man who loves them.

And that whole Tesla twist – that he just happened to build a machine that clones ANYTHING AT ALL and they figure it should be used for a murdering magic trick? That really ruined it all for me.

I love the actors. I love their acting! It’s this plot that just doesn’t cut it. Again, maybe it was OK when it released. But now? It makes the twists so obvious right from the beginning that I kept waiting for a twist on the twist. Instead, that is all we got, and it ends with Hugh and his bloated warehouse of dead clones, while Christian, who TORTURED HIS WIFE FOR YEARS with this stupid obsession with magic (and undoubtedly had his brother sleeping with his wife!!) gets to run off with his daughter.

I am baffled how I can not love a movie with these two great actors in it, never mind Michael Caine and the others. Especially one directed by Christopher Nolan. But there you have it. I watched it just to get the sequence in order, but I have zero interest in watching it again.