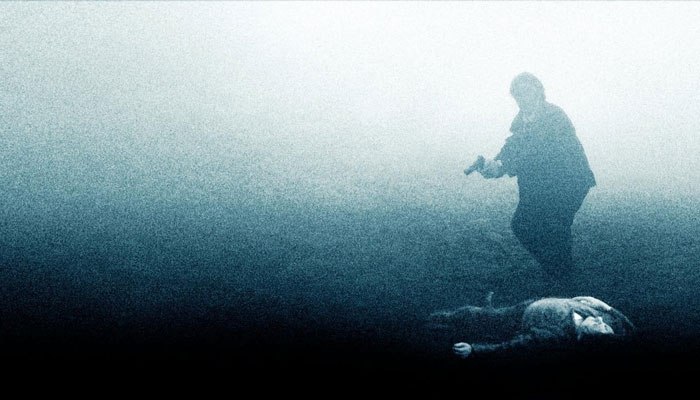 After watching Tenet recently, we went on a quest to rewatch all of Christopher Nolan’s movies with a fresh eye. Insomnia was Nolan’s third movie and his first real “big budget” movie. How well did Nolan do with this remake of a Norwegian thriller? [note: SPOILERS!]

First, Nolan is graced (as he seems always to be) with top-notch acting talent. The three main leads are Al Pacino, Robin Williams, and Hilary Swank. Each does quite well in their role, bringing texture and reality to their world. Al Pacino is a decorated LA cop with an edge. Robin Williams is a local Alaskan author entwined with the young woman who was murdered. Hilary Swank is the traditional eager young cop thrilled to be working with someone she’s idolized from afar.

The original movie was a moody exploration of the meaningless of life. But Nolan is at the helm of a Hollywood blockbuster and in general Hollywood isn’t keen on the Scandanavian-style brooding “death is all around us” type of storyline. So Nolan instead re-aims the story. He gives it a strong good vs evil arc and draws the focus in on the truth and lies – something he addresses over and over again in his movies.

So we have Al Pacino who is working with a dirty cop. Pacino accidentally shoots the dirty cop during a chase in the fog, and he has to lie about it because otherwise the IA investigation would think Pacino shot his partner on purpose. It turns out Pacino did actually cross the lines once, in framing a nasty pedophile who tortured and killed a young boy. Pacino was dirty, but “for the right reasons”. So now this leads to a new lie, again for the right reasons.

Unfortunately for Pacino, Williams saw this partner-shooting and realizes he has leverage. Williams negotiates with Pacino to construct an outcome where they both get away with their killings, by framing the dead girl’s boyfriend. It’s true that boyfriend wasn’t the nicest of people. Still, it’s a far cry from the boyfriend beating up his girlfriend to framing him for a brutal ten-minute-long beating murder. Also, letting Pacino get away with accidentally killing his partner is different from letting Williams get away with that aforesaid brutal murder of a teenage girl.

Mixed into this is the Insomnia of the title. Alaska is a fascinating place for many reasons, and their all-day-every-day light cycle is definitely intriguing. I have to say, having visited Alaska a number of times, that hotels WOULD HAVE FULL DARK CURTAINS and the idea that it’s brightly lit in his bedroom 24 hours a day feels ridiculous. Surely they could have constructed his inability to sleep some other way. In any case, the multi-day-no-sleep leads to exhaustion, hallucinations, poor judgement, and so on.

The storyline in the Nolan version feels heavy-handed, Williams is a creepy man who brutally murdered a teenage girl for selfish reasons and simply wants to get away with it. Pacino discusses how this sort of action changes a person so the killer slides into wanting to do it more and more, as they realize it’s a power within their reach. That would indicate that Williams is definitely someone you do NOT want to have loose in the world.

Pacino is a cop with decades of hard work under his belt. I’m a little more accepting of him – just once – crossing the line to keep a brutal pedophile locked up. The same mentality is here – if Pacino had not stopped him, who knows how many other young children would have been tortured and slain before the evidence was enough to stop him. Pacino took his action with anguish and for the good of the community.

I don’t see the two men as equivalent.

I appreciate the theme of truth and lies. We all tell ourselves lies to keep our world view whole. We create justifications for the rules we break, telling ourselves that there’s an important reason we’ve done it. It keeps our path in life held together. If someone else breaks the rules in a different way, we make judgements that our own rule-breaking is OK but theirs is not OK, based on sometimes arbitrary lines.

That being said, I think Christopher Nolan’s other movies took on these kinds of questions in far more elegant ways. Insomnia feels like many other high-budget thrillers. Sure, it’s a bit more cerebral and insightfully paced than an explosion-filled screeching-tires type of thriller. But it’s also fairly straightforward from start to finish. Two LA cops arrive in Alaska. While tracking a killer, one cop is shot. The other quickly finds the killer and then figures out how to take him down. Killer is killed. It’s much more linear than I tend to look for. I’d like at least SOME challenge in finding the killer.

I understand that the hunt for the killer isn’t the main point of the movie, though. It’s about how Pacino views truth and lies, right and wrong. In the end, he confesses to Swank, a woman who idolizes him, just what really happened when he planted evidence. And when Swank offers to cover up Pacino’s shooting of his partner, Pacino tells her to be truthful, no matter what the consequences. Even if it means that child torturer goes free. Because, in the end, it’s more important that she live a life she can respect and be proud of. Someone else will catch that child torturer eventually. She has to trust in that.

That right there is about the exact opposite of the original Norwegian film. In the Norwegian film, the message was that the universe is brutal, cold, and chaotic. Killers can kill without any consequences. Here in the US, we tend to like stories where good guys prevail and bad guys are shot and killed. Nolan needed to prove to US moviemakers that he could make the kind of movie they wanted to see, while also weaving in his own questions about the way we see the world.

So in that sense I think Nolan did about the best he could. The movie was a hit, movie companies loved it, and he was entrusted with huge budgets going forward so he could make the movies he wanted to make. For film watchers, the movie is a solid thriller with great acting and lovely scenery. For me it’s not as amazingly cool / rewatchable as his other works, but that is all right. Maybe we view this as a stepping stone to what he wanted to do.