Animal Names That Are Verbs 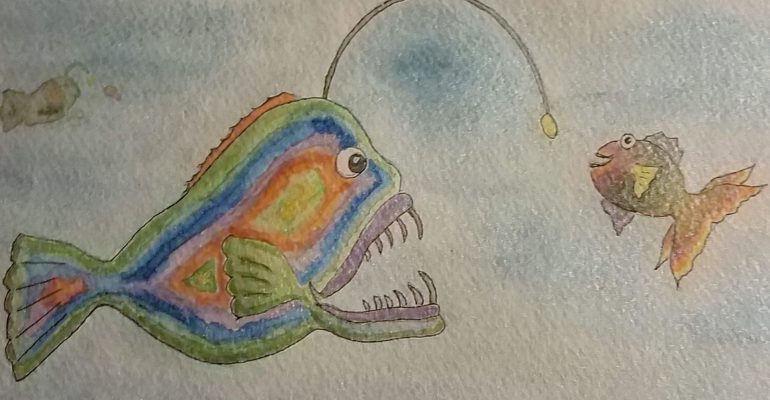 I’m having lots of fun painting watercolor images that are plays on words. Paintings that show fish fishing. Or buffalos buffaloing (threatening). It made me curious – how many animal names are also verbs?

One of the most obvious. A fish is a swimming creature. The word fish also means to try to catch one of those creatures on a hook. Fish fish. What if they like the band Phish? Phish fish fish Phish fish.

A pike is a fish. To pike something is to stab them with a pike (a long weapon). So you could have pike pike pike!

If you have an animal where the singular and plural are different, than the sentence isn’t quite so perfect. There are a number of animals that are the same singular and plural, like antelope, bison, boar, caribou, cattle, cod, deer, elk, goldfish, haddock, kiwi, moose, ostrich, quail, reindeer, salmon, sheep, shrimp, swine, tuna, and whale. But most of those aren’t verbs, which makes sentence construction hard. For most of the rest of the animals, you add an S or ES at the end when it turns plural, which sort of foils that symmetry.

The word ape also means to mimic someone. So you could have Ape apes ape.

This persistent animal rarely gives up. So you have Badger badgers badger.

To bear something is to carry it or endure it. So a bear carrying another bear would be bear bears bear.

To duck is to lower down beneath something. So if ducks are trying to avoid being hit by an incoming flying bird, then ducks duck duck.

Also based on natural behavior, a ferret loves to dig into things to get to them. So a ferret ferrets out ferret could work.

A fox is a cute little red animal. To fox someone is to trick them. What if a fox worked for the Fox news network? And tricked another reporter? Fox fox foxes Fox fox. Or if you had a lot of foxes doing it, Fox foxes fox Fox fox.

You can monkey around with something – play curiously with it. So if a monkey plays around with another monkey, you could have monkey monkeys with monkey.

If you had a bird mimicking another bird, you could have Parrot parrots parrot.

Poor rats get a bad reputation! You dirty rat? What if it’s a clean rat? But if a rat betrays another rat, then Rat rats on rat.

A snipe is a beautiful bird. Why does it mean to criticize someone? If a bird criticizes another bird, that’s when a snipe snipes snipe.

To sow seeds is to plant them. If a pig was planting another pig for some reason, you’d have sow sows sow!

To swallow something is to eat it (or drink it, I suppose). So if a bird eats another bird, you could have swallow swallows swallow.