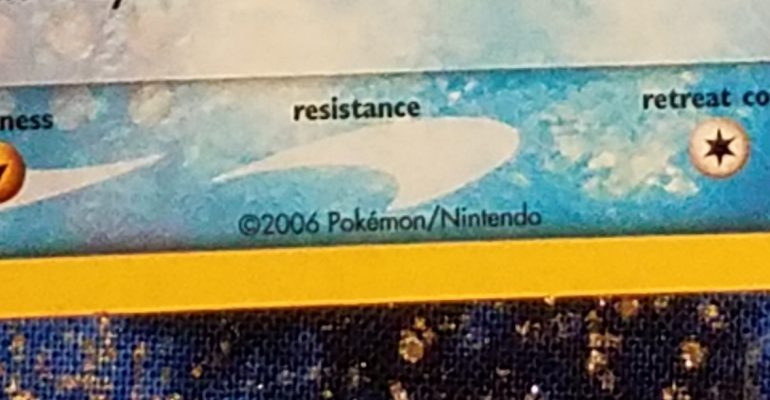 Did you know that pretty much every Pokemon trading card has a secret code printed on it, letting you know which print run it is a part of?

If you have the eyesight of a hawk, you can see it. If your eyes don’t work that perfectly, like mine, you can take a photo of the card and then zoom in on the middle or bottom part :).

One of my earliest cards is this Jungle-edition Vaporeon holo. For the Jungle edition, the version marker was found right underneath the character drawing, rather than at the bottom of the card.

That five-lobed leaf on the right means it’s a Jungle set card, released in June 1999. The bottom has additional details.

Similarly, for the October 1999 Fossil set release, the marker is right beneath the character image. In this case, it’s a bony 3-fingered skeleton hand.

Here’s the bottom from a Fossil card.

In February 2000 came the Base Set 2. The icon for this was a pokeball with a number 2 superimposed over it. There were 130 cards in this set.

Here’s the bottom from a Base Set 2 card.

In April 2000 we had the addition of the Team Rocket card set. This had 83 cards in it (with one being secret and rare). The symbol here was a big dark R.

Here’s the bottom of a Team Rocket card.

In August 2000 there was the Gym Heroes set. There were 132 cards in this set. The symbol looked sort of like a white ampitheater.

To go with Gym Heroes was Gym Challenge, in October 2000. This also had 132 cards. The symbol was a black ampitheater.

Here’s the bottom of that card.

Then in December 2000 came the Neo Genesis cards. There were 111 cards in that set. The symbol was a pair of overlaid white stars.

September 2001 brought the Neo Revelation set. there were 66 cards in this series. The symbol is a water drop splashing.

On to February 2002. We have the Neo Destiny card set. The symbol is a pair of stretched stars / Xs with blue on white. Not to be confused with a later set with a similar pattern but different colors. There were 113 cards in this set.

The Legendary Collection set from May 2002 also had their mark in the center of the card. It looked like a black medal.

As they moved forward in their releases, they began putting the version indicator in the bottom right. Like this:

Separately, it’s worth noting this card is also set up to work with an eReader. This was a way for gamers to read in their cards automatically and to unlock items in games. The E-star symbol in the bottom left, and the metal stripes on the bottom right, both indicate that this is an eReader Pokemon card.

From September 2003 was the EX Sandstorm version. The image is sort of like a crab claw and tail. The set had 100 cards. Again, this is an e-reader card. It’s also a reverse holo card, which is why this area is shimmery.

Here’s another one from 2003 – November – the EX Dragon series. The symbol for this is sort of like a cross-hairs for a gun. Another e-reader reverse-hologram card.

We’re up to March 2004. We hit a very long set name. This is EX Team Magma vs Team Aqua set! The logo is a stretched letter X, half red, half blue. Not to be confused with the other stretched X logo.

On to 2006. This is from the bottom of one of my Vaporeon holo cards. It shows a pokeball and a number 3 to the bottom right. That pokeball-3 means that this is part of the POP series 3 set. You can also see the copyright 2006 on there.

This one here is from 2012 with a snake symbol. This is the Dragon Vault set, released in October 2012. There were 20 cards plus one secret card in this set.

November 2013 saw the Kalos starter set. This symbol is like two Xs overlaid diagonally. There were 39 cards total.

In February 2014 came the very first XY set. The symbol looks like a dark Y with a white X in its center. It has 146 cards.

In August 2014 was the XY Furious Fists set, with 113 cards. Its symbol sort of looks like a raised fist.

From May 2015 was the Roaring Skies set, with a symbol sort of looking like a horned head on shoulders, using two vertical-style lines. There were 110 cards in this release.

In addition to the series indicators, cards also have a rarity symbol. These are:

To see all of my current listings for my cards, be sure to visit my ebay store!

Also be sure to read about: