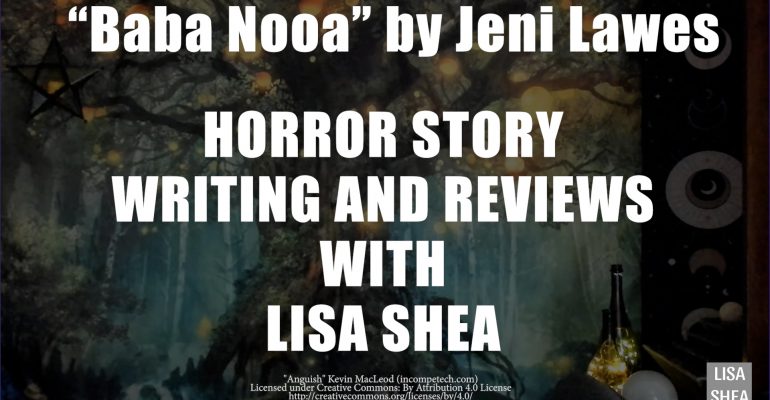 I enjoyed reading “Baba Nooa” by Jeni Lawes, story 2 in the SmashBear Publishing anthology “The Abyss Within”.

Jeni’s tale is a classic theme of a group of young adults getting lost in a dangerous wood.

I enjoyed the UK environment and language woven throughout the story.

Another reviewer felt all the stories in this anthology were set in the US, so I wanted to explain why to me this second story felt quite grounded in a UK environment, rather than a US environment. Luckily, I can do so without any spoilers!

First, the main character repeatedly calls her mother “Mum”. I’ve lived in a number of states around the United States and I don’t know of any region where children call their mother “Mum” as a traditional word. The two main words we use here are “Mom” or “Ma” (or of course “Mama” etc. for non-English speakers). When we hear the word “Mum” in the US we tend to immediately think of Britain and BBC shows.

The characters head out into the woods. One of them suggests doing something, and another responds, “That will take yonks.” I have probably watched hundreds of British TV shows and even so I had no concrete idea what “Yonks” meant. I had to guess at it by context. It’s fair to say that in all the places I’ve lived in the US, nobody I know has used the term “yonks” to mean “a long time” – it’s one of those “clearly from somewhere else” terms. If anything, when I think of “Yonks” I think of Scooby Doo and an old-school exclamation.

Similarly, the story uses “whilst” which is the British form of “while”.

With this story primarily set in woods, since there weren’t many structural or locational details portrayed, the remaining types of descriptions were “generic” – trees, paths, and so on. The cultural words which were used took on much more power, since they gave that foundational power to the tale.