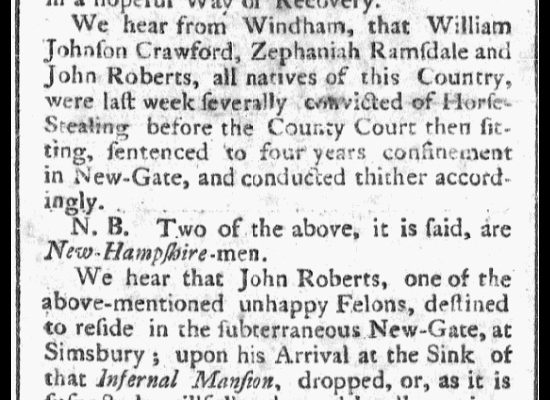 YOU HAVE GOT TO READ THIS!!! This is from the Norwich Packet, reporting on my hero William Johnson Crawford and two fellow horse thieves Zephaniah Ramsdale and John Roberts being put into Newgate Prison. The report is from March 3 1774.

The first paragraph is unrelated, but then it gets into the good stuff.

It is completely over the top!! Horse Jockeys Beware!! Inexpressable Horrors of that Den of Death Newgate!!

“Free-booting horse jockies beware, for a gibbit is comparatively a toy to the inexpressable horrors of that den of death!” Jeez Louise :).

This is from the March 4th 1774 Connecticut Gazette. It is much more tame in its reporting. The “previous Friday” that the sentencing happened would have been February 25th, 1774.

This is the first news of the escape of William Crawford and Daniel Humpry. The escape was Sat April 9 1774. This is from the Connecticut Courant on Tue April 12 1774. Their reference to someone going in ‘last week’ was Daniel Humpry who was put in April 5th. He escaped 4 days later, with William Johnson Crawford (my novel’s hero).

A more detailed account of the daring escape came in the April 19 1774 issue of the Connecticut Courant :).

This one is too funny. The Connecticut Courant on May 3 1774 is running the news again about the daring escape of William Johnson Crawford and Daniel Humpry. They add another article explaining that the remaining 3 prisoners in Newgate have now also escaped, too, so the prison is empty. Every single person put into the prison so far has escaped.

Here’s the news from May 10 1774 from the Connecticut Courant about both sets of escapes. And then apparently they gave up trying to find them :).

Suspiciously, in the exact same May 10 1774 Connecticut Courant, on the same page where horse thieves are described as having escaped, we have news of a horse being stolen. Coincidence??

AHA! AHA!! I found the report of the actual horse being stolen in the first place! The Pomfret CT guy who reported his horse being taken, Elisha Gleeson, is the same man who then caught the two thieves up in New Hampshire. He hopped on his other horse and chased after the thieves!! This story gets better and better :). In the Connecticut Gazette, Feb 11, 1774.

Ooops I had missed one. Elisha Gleeson ran the same offer for a reward in the Feb 4 1774 issue of the Connecticut Gazette. The horse was with foal!! What kind of a monster steals a pregnant horse! Ooops this monster is my hero. Now I have to figure out the plot …

OK the third and final plea from Elisha Gleeson on Feb 18, 1774, in the Connecticut Gazette, wanting his pregnant horse back. By this point I think he’s already captured the two thieves up in New Hampshire. It is pretty impressive that he was able to track them all the way from Pomfret CT, through Massachusetts, up into New Hampshire. Maybe he should have been my hero …. ooops …