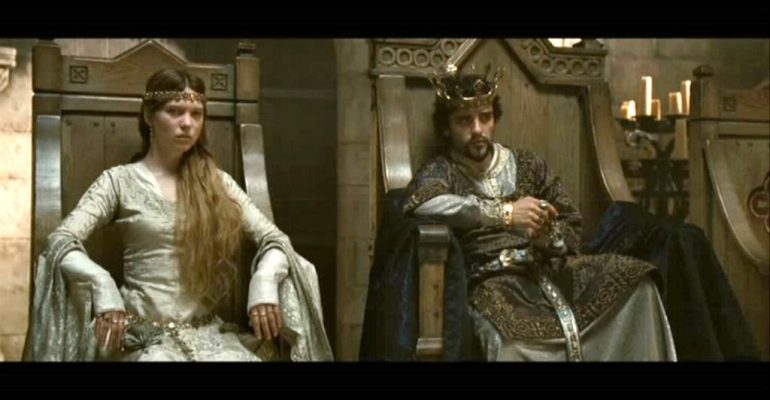 Here I am writing medieval novel after medieval novel set in the time of King John and Dad never once mentions that we’re actually descended from him :). And in the meantime I’m describing King John as a villain! I should have been writing about how kind and gentle and wonderful he is!

I just finished my basic research, which Dad kindly gave me a link to get started. Let me know if you spot anything that needs more research in this listing.

Yes, that King John. You probably didn’t even know King John had a son. King John just spent all his time tormenting Robin Hood and stealing money from the poor. But King John did have a wife – Isabella of Angoulême. They had five children together. The pair are shown in the above photo (from the 2010 movie version of Robin Hood).

One of those children became Henry III when he was only 9, after King John died of dysentery in the middle of a massive revolt by his barons.

Henry III tried to do better.

Henry III’s wife was Eleanor of Provence – a French noblewoman. She adored her husband but was hated by the locals. She was a talented poet. They had 5 children together.

Soon Henry III was being rebelled against and during battle he and his adult son Edward were captured. Edward managed to escape and free his father. When Henry III died in 1272 of illness, Edward was 33 and had ample experience with war, negotiations, and rebellions. He was tall for the age, 6’2″, and imposing. He was called “Longshanks” for his height.

Edward’s first wife was Eleanor of Castile. They had up to 16 children. Only a few made it to adulthood. The two youngest children were Elizabeth – who I’m descended through – and Edward II who became king. The two were quite close.

Elizabeth was the youngest daughter of King Edward I and Queen Eleanor of Castile. She was close to her younger brother Edward II, later to be king. At age 14 she was married off by her father to John, Count of Holland on January 8 1297. He was 13. She was supposed to go back to Holland with John but she refused and he had to leave without her. Finally the family decided to try to make it into a fun holiday for her; her father and two sisters took a travel-trip through Europe ending up in Holland for Christmas. But by Nov 10 1299 the Count died from dysentery. Some say murder. Elizabeth hadn’t had any children and returned home.

Barely three years later the family married her off to Earl Humphrey de Bohun. That was November 14, 1302. She was now 20 years old. He was 26. So not as awful as some marriages back then, in terms of age range. They had at least 10 children together. We are descended from William. The Earl was involved in many battles. His wife Elizabeth died in labor on May 5 1316. He died in battle six years later.

William was the grandson of a King. He became a Knight of the Garter and High Sheriff of Rutland. He was a well respected soldier and diplomat. It was he who negotiated for the release of King David Bruce of Scotland. We’re descended from his daughter Elizabeth.

This marriage united two of the most powerful families in England. She was very well regarded and respected. She was only 35 when she died, but had already had 7 children. We descend through Elizabeth the daughter.

Richard carried the crown for Richard II at his coronation. He was in the King’s Council and a Knight of the Garter. He was feisty. Richard II got annoyed enough by Earl Richard that the King ordered Richard beheaded, which happened on Sept 21 1397.

Elizabeth F was a feisty woman with five different husbands. One of those was Thomas de Mowbray. This was the husband before Sir Robert. Through that stepfather’s line comes John de Mowbray and, eventually, Anne Boleyn. Elizabeth had at least six children through her various husbands.

We descend from daughter Elizabeth Goushill.

Sir Robert Wingfield (the junior) was born ~1403 and married Elizabeth Goushill in the mid-1400s.

He was knighted in 1426 by King Henry VI. He was MP for Suffolk. He was the steward to John de Mowbray and attended the court of King Charles VII of France. So Elizabeth G’s husband was stewart to her half-brother.

He had at least 12 children – 5 sons were knighted. The eldest daughter, our line, was Elizabeth. The family home was Letheringham, Suffolk, England. He died ~1452-1454.

I cover Sir Robert’s parents at the very bottom, so things don’t get too confusing here.

They had many children including: Sir William Brandon, Sir Thomas Brandon, Sir Robert Brandon, and Eleanor Brandon. We are descended from Eleanor. William (the father) was knighted by Edward IV on the field at the Battle of Tewkesbury. He swore allegiance to the future King Edward V. He was Knight Marshall. He was then present for Richard III’s coronation.

Two of his sons then joined the rebellion against Richard III with Henry Stafford which caused immense problems for the family.

The son William (Eleanor’s brother) was born ~1456; he was around 30 when he died on August 22 1485 at the Battle of Bosworth Field. He was Henry Tudor’s (soon Henry VIII) standard-bearer and was directly killed by Richard III.

The standard-bearer had three children before he was killed. Charles Brandon, the only surviving son, became Henry VIII’s closest friend. He was a great jouster and was made Master of the Horse. Charles loved Henry’s sister, Mary, even before she was married to King Louis XII of France. He jousted at her wedding celebration. When King Louis XII died in 1515 Charles was sent to bring her home to England. The two wed in secret, which made King Henry VIII furious; he was the one to choose who his sister wed next (undoubtedly a political match). But Cardinal Wolsey intervened and soothed things over.

The son Thomas was a talented knight who also fought at Bosworth. He became a Knight of the Garter and was Master of the King’s Horse. He had no children.

The father William died around 1491, six years after his son William.

Eleanor probably had enough of brothers being killed on the battlefield. She became the second wife to John Glemham, Esquire, 15 years her senior. His first wife Anne had died March 5 1466 when Eleanor was only 2. Glemhan lived in Glemhan, Suffolk, England – i.e. the town was named for his family. So he wasn’t rabble :). Still, his parents were John Glemham II and Katherine Rochford, not well documented people.

Eleanor and John had six children. We descend from Anne. The son Sir John Glemham (Anne’s brother) was knighted. One sister, Katherine, became a nun.

In “Magna Carta Ancestry: A Study in Colonial and Medieval Families” – page 302 – it says: “John Glemham of Glemham in the counte of Suff. esquyre sonne & heyre to John maryed Eleanor Daught’r and after heyr to Sir Wyllm Brandon knight (Glemham arms: Or, a chevron between three roundels Gules).”

They lived in the town of “Little Palgrave” – named after his family. The Palgraves have monuments built to them in their town.

This couple had 12 children. One became a nun. We are descended from Thomas.

Thomas was given the manor of Thruxton by his father. Alice was daughter of Robert Gunton.

They married ~1537 and had seven children.

We are descended from Edward.

Edward lived and died in his family town. Probably with all his siblings around him. He was the rector of Barnham Broom from 1567-1623 (the year he died). Edward lived a nice long life, to age 83. He left a will asking to be buried in Barnham Broom (reference shown in “Plantagenet Ancestry” p374)

Oddly, we don’t know who the wife was. We only know he had four children, including Richard. Church records didn’t begin until the 1630 timeframe, so after this generation was dead.

He’s the point where it comes to the New World; he died in Charlestown MA

On this link below, you can follow up through his parents.

The rest below is now traceable in American records.

OK back to the Wingfields, at least briefly. Sir Robert.

In the late 1300s Elizabeth Russell married Sir Robert Wingfield (the elder). They had a son, Robert. The father died about 1409. This elder Sir Robert Wingfield is mysterious. While the parents and children are well documented, this middle link is shades of gray. Rumors are that he’s related to Sir John de Wingfield who was chief administrator to Edward the Black Prince. This other John de Wingfield only had one known child, Katherine, who inherited the family estate. She married Michael de la Pole, 1st Earl of Suffolk who is infamously known as a devious troublemaking counsellor for King Richard II. Michael was the first official ever impeached and fled to France. His son fought for Henry V and died at the siege of Harfleur.

The reference to Edward the Black Prince is here, on Robert’s son’s page:

Elizabeth’s father Sir John Russell was born before 1373 and married three times. His family owned the manors Peopleton and Dormston.

John was a well-regarded soldier; he was knighted in 1378 and given lands formerly owned by Alice Perrers, disgraced mistress of King Edward III (she was tried for corruption). John was a retainer of Thomas Beauchamp, then a king’s knight for King Edward III, and then also given acclaim by King Richard II. In 1390 he was a member of the English team in jousts against French Knights in Calais; in 1391 he became the king’s Master of the Horse.

His first wife, who he married before Oct 1382, was Agnes, last name unknown. They had four children: William, John, Margaret, and Elizabeth. We descend through Elizabeth.

Let me know if you have any questions, comments, or suggestions!