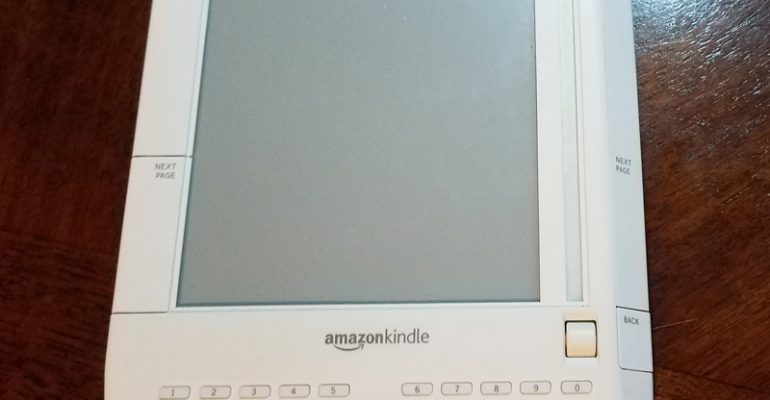 I have a Kindle first generation ebook reader. Not the Kindle Fire first generation, which came later. I’m talking about the original white-case, black-and-white display first generation Kindle which released on November 19, 2007 and sold out in about five hours. This was when I was first releasing ebooks on Amazon and wanted to test out how they’d look. Back in those old days, there was barely any competition in the ebook market and being an author was lovely :).

This is the Kindle model D00111. It only displays in rudimentary black and white. The plastic case has an actual physical keyboard as part of its front. The case came in one color – white. There was even a scroll wheel on the right side to move through menus. That vertical bar over the scroll wheel would light up in silvery color to show where you were in the scroll length.

I have now lost my power supply :). It’s a circular / barrel shape supply. The power connector is NOT the trapezoid in the middle. That trapezoid – a USB 2.0 Mini Type B – is for connecting to a computer. The left port is a headphone jack. The power supply is on the right and is the very small – maybe 3mm across – round hole. Beneath the power port is a symbol with one long solid line over three dashed lines. Sounds like iChing to me :). It’s actually the symbol for a DC power supply.

I’ll note the Kindle manual says: “USB port — plug in the included USB cable to transfer content between your computer and your Kindle. Your Kindle will also accept a small trickle charge over USB that may extend your battery life if your computer’s USB port or powered USB hub provides power” – I haven’t found that to work very well.

Here is a stock photo of what the original power supply looked like. I remember having it. I can’t find it now.

Someone is selling a compatable power supply for over $20 which is highway robbery. I just need to know the size of the power supply to work with this. I know from the markings on the unit that it needs to be 5VDC and 2.0A. That part is easy enough.

From an eBay listing I can see from the markings that the tip is positive and the outside is negative. Also helpful. The connector name is an A00310.

Does anyone know the actual SIZE of this connector?

Here’s a close-up of the port:

The Kindle power port appears to be about 3mm wide.