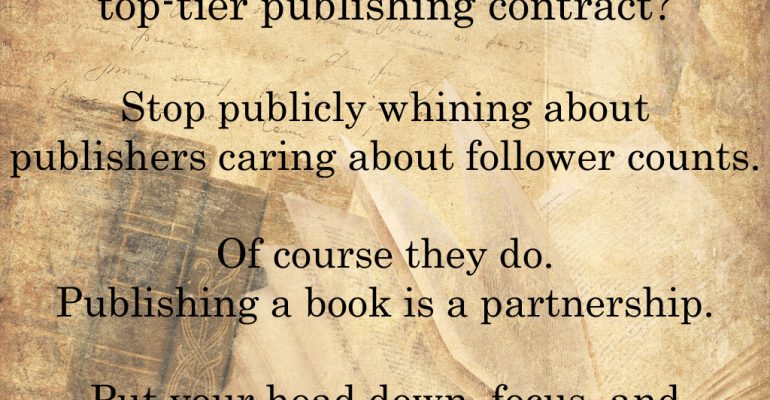 I know an author who is striving to get a publisher. Today she was publicly whining that the publisher wanted to know her follower count – and that it was stupid because THE PUBLISHER was supposed to do all the work of selling her book for her. She’d done her part, writing it, the end.

I have a feeling that publicly venting like that is not the way to build a relationship with a publishing house. The publishing house has thousands of other manuscripts coming in weekly which are just as good. Undoubtedly a number of those come with authors who are eager to do their part of the marketing task.

If an author presents herself as unwilling to help at all, she automatically has created large barriers in the relationship. Given the thousands upon thousands of other authors eagerly competing for that same contract, why would any author deliberately downgrade their chances?

Tip: Don’t whine in public about how you’re unwilling to help support your book’s sales. If your follower count is low, work on building it up. If your marketing skills need help, take steps to build them. Your source manuscript may be great – but so are thousands of other manuscripts flooding the publisher.

Many of those authors will bring solid marketing systems and fan bases with them. If you want to compete against those, then compete.