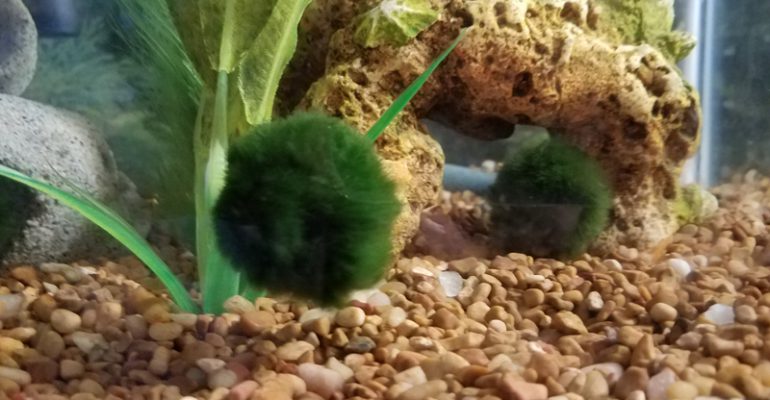 It’s interesting that there’s even a problem with fake marimo moss balls. It shows the strange world we live in. I did tests and the Marimo sold by Aquatic Arts seem to be wholly authentic. Plus, they are awfully cute and enormously helpful to a fish tank.

First, some of the basics. MARIMO ARE NOT PLANTS. They aren’t moss either. They are algae which naturally can form into a sphere shape based on water wave action. In your tank you replicate that by turning them occasionally. That helps them to continually grow out in that sphere shape. They need gentle light and some nutrients (nitrates, carbon dioxide, etc.) to live. You’ll want to do regular water changes, just like with a fish tank. They live fine in freshwater but not saltwater.

With this set from Aquatic Arts you pay for 5 1-inch marimo. I got 7 in my package. If you look at other peoples’ 1-star reviews they complain because their marimo were damaged in shipping, probably by being shipped in weather which was far too hot or cold. That’s outside of the vendor’s control, and the vendor is awesome at replacing these problems. But the very fact that a small portion of marimo die due to those temperature issues in shipping means of course THE DARN THINGS ARE ALIVE. They aren’t plastic or fiberglass. Plastic wouldn’t get black and stinky due to overheating.

Still, what if it was moss wrapped around a foam core, as some unethical vendors do? The easy way to test that is to cut one in half. So I did that. As you can see, it is marimo algae all the way through. If it was wrapped moss it would then unwrap. If it was squished moss you would see the spaghetti-like mish-mash in its center where it was squished. Instead, this marimo has the nice radial growth shape from a center point. Again there is no “core” on a marimo. They don’t form around an object like a pearl does. They just grow out. So this is a real marimo.

Make sure you thoroughly rinse and squeeze your marimo when you first get it, then sit it in cool water for a half hour, then rinse and squeeze it again. Now put it in your tank. If you do get one that was damaged in shipping and is smelly, brown, black, etc., just contact them. They’ll send you new ones. If your location is experiencing a 110F heat wave now is probably not the time to order one via the mail.

Over time you can weigh and measure your marimo to watch them grow. That’s of course another sure sign they are alive. Just be patient. They only grow 1-2cm a year. On the other hand, if you see single strands reaching up toward a light, that’s a sign you got a moss-rolled version. So far, I haven’t seen that happen with these. And, again, I’d be able to tell if it was moss (rather than algae) when I cut one in half.

To summarize – these are absolutely perfect for my 20-gallon tiger-barb-only tank. The tiger barbs love them, the marimo help hold down nitrate levels, and they look cute.