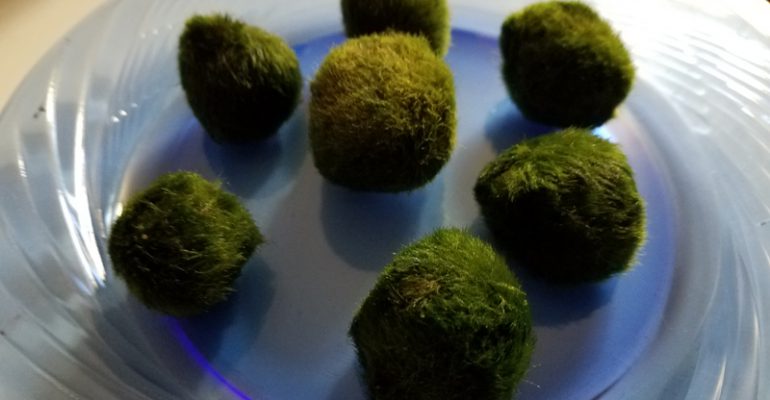 The marimo moss ball is one of the coolest additions one can get for a freshwater aquarium. But how can you tell if your marimo is fake or real? Here is how to differentiate between the real, healthy marimo moss ball and the fake moss or plastic versions.

To begin with, despite its name, the Marimo Moss Ball IS NOT MOSS. It is not a plant, either. It’s algae, which many people consider to be separate from plants. The way algae work is different from plants. So what you have is a form of algae that naturally grows out into a ball shape due to how it’s tumbled and moved around by water currents.

It needs gentle light to live, along with carbon dioxide and a few nutrients like nitrates. That means a marimo moss ball does delightfully well in most freshwater tanks. Goldfish will try to eat it, but most other fish will leave it alone.

One of the most common ways unethical vendors make marimos is to use actual moss rather than the marimo algae. They wrap that moss into a ball either around a foam / Styrofoam core to give it shape or just mush it into a ball and hope it holds tight. So the best way to tell if your marimo is real is to cut one in half. Here I bought seven of them so I didn’t mind turning that into eight by slicing one in half.

This is what you should see. No foam or plastic in the middle, clearly. A marimo has no “core” to it. It should be green right to the middle. And if you look, you can see a radial form to the growth. Things are oriented around that center. With a fake mashed-up moss one, it would look like swirls of random spaghetti in there as the fibers were all mished and mashed together.

Marimo are very hardy. You can’t tell if it’s real just by putting it in the sun for a day or yanking at its green edges. If you really wanted to kill one, you could fill a bucket with chlorine and drop it in there. That would do the trick. But you shouldn’t have to go to that extreme. Cut one open if you’d like. Then put them in your tank and see how they do. They should grow a centimeter or two a year. They should need some rotation to stay green on all sides. They should have a small effect on nitrate levels. They are, after all, living creatures.

Ask with any questions about your marimo pets!