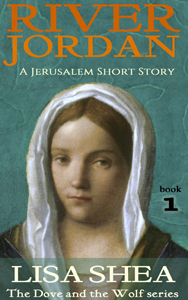 Phoebe's life was moving as orderly as the recitation of prayers on a shimmering springtime evening. She was ready to leave the one-room bavith she had shared with her family since birth, at the outskirts of Jerusalem, to wed her betrothed. She would learn to love Joel, she was sure of it. All they needed was time.

And then, strolling along the River Jordan with her young nephew, she came across a scene which would change her life. John the Baptist was talking with a man who radiated serenity. The visions seared her soul. A baptism - a dove - and a watching Roman legionnaire with steady eyes like a wolf's. When Joel grabbed her arm and scolded her for straying from her path, she had that sense.

That sense that nothing would ever be the same.

River Jordan is Book 1 of a gently cliff-hangered short story series. The sequence will lead up to a happily ever after ending. The series is clean romance and is suitable for all ages.

Half of all author's proceeds benefit battered women's shelters.

I would love your input as I'm writing these - it's your suggestions which will help guide the direction the story moves in! If you prefer to read your stories complete, you are welcome to wait until the sequence is complete and then buy the box set. Either way, you support the cause!

The Wolf and the Dove Series Main Page

Become a fan of Lisa's novels to hear the latest news on release dates and other fun information!