The rabbit is a symbol of spring and fertility in pretty much every culture on Earth. For Christians, the rabbit is a potent symbol of Easter, of the bringing of new life and a fresh start. Rabbits are found in many Easter baskets during this holiday. Many people find the rabbit to be very lucky, and some even carry a "rabbit's foot" for luck. 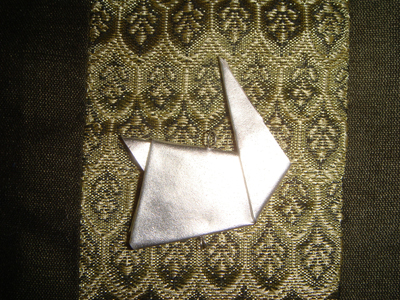 In Japanese culture, the rabbit is closely associated with the moon. Where westerners often see a "man in the moon", the Japanese see a rabit in the moon's design.

The rabbit is also known as a "bunny" or "bunny rabbit". A group of rabbits is a "kindle"!

Rabbits are famous in literature, from Peter Rabbit by Beatrix Potter to Brer Rabbit in traditional tales. There was Bugs Bunny from Warner Brothers and the White Rabbit in Alice in Wonderland by Lewis Carroll. In literature and mythology rabbits are shown to be friendly, smart, quick, and helpful! 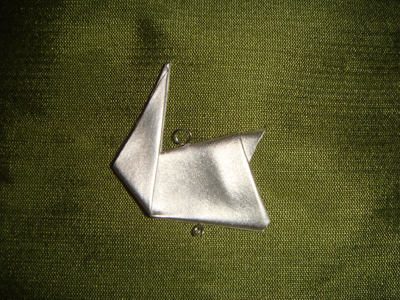 The silver rabbit has a loop at its back for hanging on a necklace. You could slide a pin through that loop and wear it as a pin. You can also run a cord through the loop to hang it in a window or on a wall as a decoration.

If you are fond of gemstones, I can mount a gemstone bead beneath the rabbit's base. Roze quartz (pink) is a popular color for rabbits. Pink is a traditional spring color, and matches the pink nose of a bunny. Another perfect color is green, to reflect the fresh green of spring. Green gemstones are malachite and mossy stone.

I can customize your silver rabbit with any gemstone in my gemstone listing. 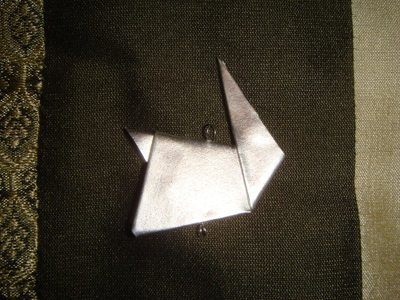 This silver origami rabbit is created with PMC. PMC is a special "clay" created in Japan - a thin melding of actual pure silver with a clay binder. I carefully hand-fold this clay into the desired shape, let it harden for 24 hours, and then fire it in my kiln.

During the firing process the clay burns away, leaving behind only the pure metal silver. The result is a beautiful piece of jewelry which can be handed down for generations! 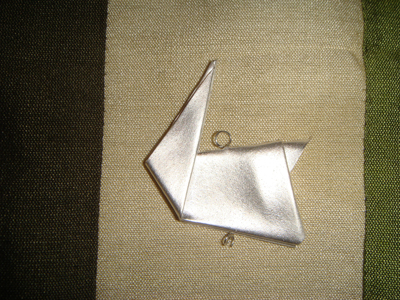 Please let me know if you have any questions about PMC clay, origami, or the history of the rabbit in various cultures.

Have a wonderful day!