The Japanese helmet, or kabuto, is a sign of honor and strength in Japanese culture. For the Japanese samurai, portraying truth and steadfastness was a critical part of being a mature person. When a samurai went into battle, he would put bold symbols on his helmet. He would not try to "hide" amongst the spearmen. Rather, he would stride to the front of the group, make sure he was seen by everyone, and take on any challenger. He would feel honored to be singled out for combat, and would strive to do his very best to win the battle. 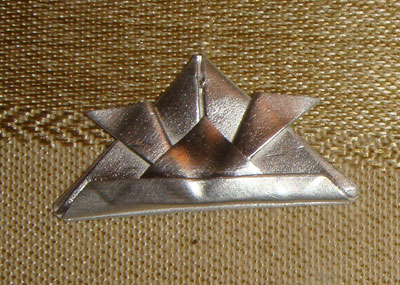 Helmets could have any range of symbols and designs on them. Some samurai would put deer antlers on their helmets. Others would put large moons or suns. Samurai would decorate their helmets and armor with their family crest to make it clear who they were.

This same mentality was found with the Knights of England. The English knights would create large banners which would show their family heraldry, so that it was clear to the enemy who was on the field. They would stride into battle, eyes open, body ready, to face their opponent in one on one combat. They trained and studied their entire lives so that they could be the very best they could be.

The silver Helmet can have a loop at its top for hanging on a necklace. You could slide a pin through that loop and wear it as a pin. You can also run a cord through the loop to hang it in a window or on a wall as a decoration.

If you are fond of gemstones, I can mount a gemstone bead beneath the Helmet's base. Hematite - a shiny, metallic looking stone - is the perfect match. This is known as a "blood stone" and is worn by many warriors to give them invincibility in battle. You can of course choose any stone you wish from my selection!

This silver origami Helmet is created with PMC. PMC is a special "clay" created in Japan - a thin melding of actual pure silver with a clay binder. I carefully hand-fold this clay into the desired shape, let it harden for 24 hours, and then fire it in my kiln.

During the firing process the clay burns away, leaving behind only the pure metal silver. The result is a beautiful piece of jewelry which can be handed down for generations!

Please let me know if you have any questions about PMC clay, origami, or the history of the Helmet in various cultures.

Have a wonderful day!