One of Dan Brown's larger blunder sets in his book involves the famous painting of Leonardo Da Vinci called Virgin of the Rocks. The first mistake is that Brown changes the painting's name to Madonna of the Rocks. He does this solely so he can make an anagram. The clue on the Mona Lisa says "So dark the con of man", which Robert goes on and on about, how the church has conned mankind. Really, it is an anagram of "madonna of the rocks". I guess Dan Brown couldn't think up an anagram to go with "Virgin of the Rocks".

About the Paintings
Some people claim the painting is actually a wood base painting and therefore Dan Brown was wrong in describing it as canvas. You need to understand that there are actually TWO versions of this painting out there. The wood base one is the copy that is in London. You can see above the differences between the two, in the faces of the people and in the baby Jesus and his staff. Leonardo painted the canvas one in 1483. There were contract issues so he painted another one on wood in 1503, MANY years later. The canvas one is the one in the Louvre. So Dan was correct about that.

Dan Brown claimed that the painting was redone was because the requesters were "furious" at the first version. Actually it was a pretty boring issue about a contract that had Leonardo redo it.

Virgin of the Rocks in the Louvre
When I went to see this painting in the Louvre, it was hanging in the main Grand Gallery hallway. In the book, Robert is in near the Mona Lisa in a side room - in the Salle des Etats. The guard has him at gunpoint, when the guard spots Sophie in the same room walking around. In fact, the guard is "a good twenty yards" from the entrance to the room, and can't get a good walkie-talkie reception because of the room's security. At that point Sophie grabs the painting. That would be a trick, since the painting isn't in that room. It's out in the Grand Gallery.

Sophie the Shield Maiden
Sophie uses the "Madonna of the Rocks" as a canvas shield to get the guard to drop his gun. Of course this was meant to cause pain and anguish to art lovers everywhere. Specifically, Sophie had just fetched the key out of the back of the frame. She now threatens the guard with the painting's destruction if he doesn't drop his gun. Brown says she picks up this 5' tall painting and wields it. I could strain credibility to think of this woman waving around a 5' tall painting. However, the painting is *really* 6.5' tall and has a HUGE heavy wooden frame. Sophie could hardly have moved it, never mind wielded it like a shield!

I snuck a quick photo of the painting while I was at the Louvre. It's hard to get a sense of scale here, but you can see some peoples' reflections in the lower part of the glass of the painting. This is a very large painting. The frame is very solid. You'd need a weight lifter to move this. 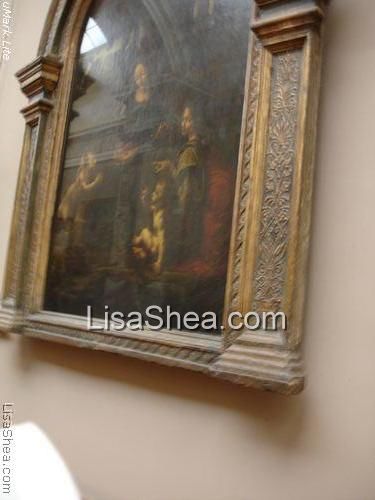 Dan claims that the angel's hand in the first painting is "frightening". Really, the angel is just pointing at John. You see this same pointing gesture in many other paintings. It doesn't look very scary to me. For Dan to see all this horror in a painting about two babies is a bit extreme.

Finally, Dan claims that the redone version of the painting has different positioning than the original. As you can see by comparing them side by side, this is not true. The London version has halos, and wings on the angel. The "reed cross" was painted in later by someone else so is not part of the original painting. In the first painting, the angel is pointing at John to say "look there he is" while in the second the hand is removed so that the halo has a spot to go in. Other than that, they are pretty much the same.

Sex Changes
Dan Brown states that "nuns" at the Confraternity of the Immaculate Conception gave details on the work. Actually, that organization is male-only. On the other hand, note that the angel on the right, Uriel, is supposedly male. That angel looks pretty feminine to me.

Visitor Comment -
Thank you for your interesting and helpful critique on the Da Vinci Code. One thing I was a little confused about when I read the book and had a look at the Madonna of the Rocks was how to tell the two children apart. Dan Brown seems to assume that the child on the left, whom Mary is touching, is Jesus, and the one on the right, further from Mary, is John. If I understood your comments correctly, you assume that the child (on the right) who is blessing the other is Jesus, and the child with his hands clasped in a humble, prayerful attitude (on the left), is John. How do we know which child Leonardo intended to be which? (Incidentally, I agree with you on the subject of Brown's other comments on the apparent violence and anger depicted by Mary and the angel's hands.)

My Response -
Yes, Dan definitely confused the two children. The main issue is that the painting was commissioned as depicting Jesus blessing John. It's sort of clear looking at the two kids which one is blessing which other one. Also the second one had John the Baptist holding the staff which is traditionally associated with him. That's sort of a giveaway, sort of like showing Judas with silver in his hand. It's a symbology that everyone at the time would have understood. Yes, Leonardo didn't put the reed cross in himself, but everyone who saw the painting knew it was John and understood when it was added in. There would have been a huge furor if this famous painting had been altered in a way that fundamentally changed its meaning.