One of the most blatant errors in The Da Vinci Code involves the famous Louvre pyramid. [SPOILER ALERT] This has got to have been one of the EASIEST things for him to have checked, with the museum being the central location of the story and in fact the final resting place of Mary's bones. This should have been critical for him to research properly.

Pane: "A framed section of a window or door that is usually filled with a sheet of glass or other transparent material. "

The statistics I find on the pyramid from architectual sources say it has 603 diamonds and 70 triangles total (i.e. 673 panes in all). Every book I find on the subject states that. Heck even GlassOnWeb knows the answer. Any person with eyeballs looking at photos can count. I went to the Louvre with my friend Peter and we took a TON of photos so you can count for yourself. Here is a sample. 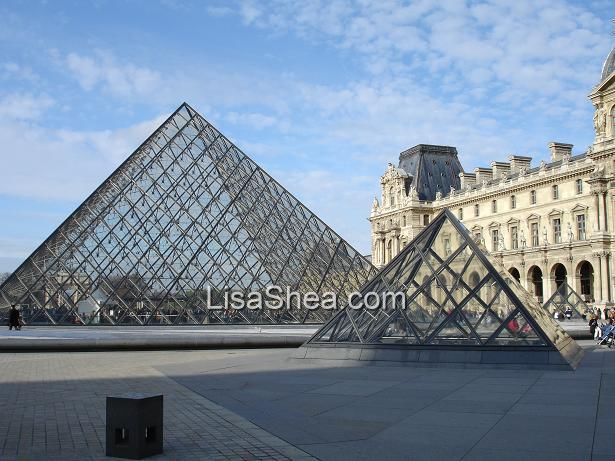 It has panes on 3 sides - but the 4th side has an entrance cut into it. You can look through my travelogue for a ton of photos to count for yourself.

Dan Brown simply made that lie up, which is pretty cheap. It's inventing a falsehood about a major work of art - a real life location that we can all go to visit. It is like claiming that the White House used to be where satanic rituals were held, slaying maidens. Why malign a public location?

What is the Number of the Beast?
For those who skipped Bible School, the origin of this situation comes in Revelation 13:18: "Here is wisdom. Let him that hath understanding count the number of the beast: for it is the number of a man; and his number is 666." This is thought to refer to an earthly representation of Satan.

I was quite enamored with the thought of this in Roman numerals. The actual name of this book is "The Revelation of Jesus Christ ... unto his servant John" and it was written by John the Apostle. Some claim that it was written by a different John - John of Patmos. In any case, it was written somewhere between the year 60 and 90. It was written in Greek so the way it was shown was ???´ - i.e. the Greek representation of that number.

While the writings were done in Greek, the people of this time lived in a Roman culture. In Roman, this number would be shown as:

Which happens to be the full sequence of letters (except the M for thousands) from 500 down to 1. So it could have been really saying something about "descending into nothingness" vs the actual final number 666. Mathematically, 666 is also intriguing because if you take the first 7 prime numbers and square them, i.e.

That also adds up to 666. I am more intrigued by the DCLXVI situation though, that seems to have more meaning.

If you're afraid of the number 666, you have Hexakosioihexekontahexaphobia.

From a Visitor -
My family & I were in Paris last year and my eldest son wanted to see the Mona Lisa. I took him to the Louvre and we waited in the queue to be filed past a frankly unspiring painting in the short time we were able to contemplate it. The point is, the queue entered at the south of the room and we exited to the west of the room into an area of some wonderful paintings. In the Da Vinci Code, (p151 paperback) Brown contends that the door off the Grand Gallery to the Salle des Etats is the "sole point of entry". Perhaps things have moved since he last went, so I wouldn't want to press the point. I certainly wouldn't want you to publish my contention without corroberation.

Which brings me to one of Brown's detractors, who claims that the Pyramid has 793 panes of glass. I myself did a double-take when I read 666, because the Pyramid is four-sided and 666 is not divisible by 4. However, neither is 793. I have been able to look at photographs of the pyramid and reckon that it is constructed from four 18x18x18 triangular matrixes. This consists of 492 diamonds and 72 triangles. I've no idea where the detractor gets the rectangles from, but don't take my word for it, do a search for "louvre pyramid" and see the photos for yourself.

My Response -
I think he was simply in error on the gallery information.

OK, now to verify. The stats I find on the pyramid from architectual sources say it has 603 diamonds and 70 triangles total (i.e. 673 panes in all). Nifty. They also say that the glass is 21mm thick and it was created by I. M. Pei amidst great controversy. The Louvre official website gives the 673 count as well. Plus in addition to the main pyramid there are two smaller "skylight" pyramids, one on either side. So there are even more than 673 panes if you count those other ones. It could be that the smaller ones have rectangles in them, it's hard for me to make out from the photo. But I think this 673 is fairly reproducible to anyone who looks at these photos.

From a Visitor -
Right for the Louvre's Pyramide error. I'm living in Paris, and I went there to count the number of panes of glass. 673 exactly. The fact is that there is a myth about 666 often repeated in common website, and even I think in tourist guides. That must be the Brown's sources. Good Website.

My Response -
How in the world could tourist guides go around printing something that was both blatantly untrue and quite "upsetting" to people who believe in the Bible? Again it would be like claiming that a satanic symbol was built into the mosaics in the House of Lords or something like that. First, it's obvious if you look at it that it is NOT true - and second, it casts a shadow on an artistic creation that someone worked hard on. I find that really cruel and nasty.

My Response -
OK, the 612 and 72 pane counts are exactly what we found here - 684 panes in all if it was a FULL PYRAMID. But remember, there is an entrance cut in the side of the pyramid. Those panes never existed. There is a hole there. So there are only 673 panes in the actual pyramid as it was built. So the rest of your math cannot happen :)

From a Visitor -
GPS satellites transmit signals that are read by receivers who decode positions. They DO NOT work indoors, and would not work within the Louvre. Further, they do not "re-transmit" info that is uploaded by the French police.

My Response -
Brilliant point, I own several GPSs and I can barely get them to work in a car without holding them against the window. If I use them in an airplane I have to do the same thing. They really do not work at all inside a building. Good catch!

From a Visitor -
One of the cornerstones (keystones!) of the plot is the security system at the Louvre.

1. The "thundering iron gate" that traps Sauniere in the gallery at the beginning is such obvious nonsense. Brown talks about it being prohbitive to use video surveillance and says "forget keeping theives out, keep them in". Apart from how these huge gates disappear into the ceiling or how they work it is not a secret that physical protection (keeping thieves out) is the first principle of all museum and gallery security. See advice to architects and planners on museum security at http://www.mla.gov.uk/information/advice/secure03.asp

2. The same issue arises with the window in the washroom at the end of the Gallery. This is clear plate glass with "alarm tape." Apart from the fact that toilet windows are frosted, if this is correct a thief could steal all the paintings in the gallery and throw them out the window before using a rope to exit the building. Pretty stupid! See the above-mentioned site - all museum windows are made of security glass or have grilles.

I also don't understand where Sophie "doubled back" from after she left Fache. If she could go back the way she came but still reach the washroom why couldn't they just escape that way in the first place.

I like the fact that apparently the only way to activate the security system in the Louvre is to pull a Caravaggio off the wall. Perhaps a button would have been simpler.